Week seven of Mark Lundy's murder trial was when the jury got to hear from the man himself - albeit via his taped police interview rather than in the witness box. 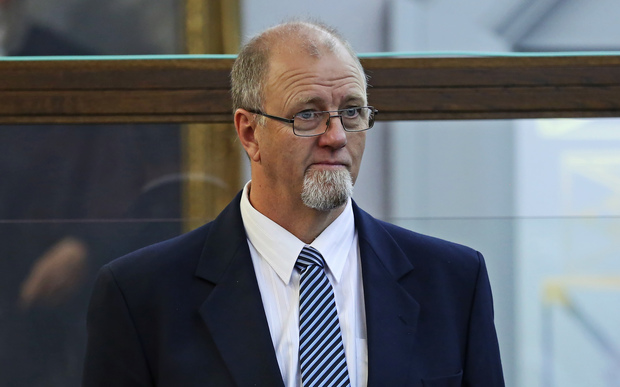 Mr Lundy, 56, is accused of murdering his 38-year-old wife, Christine, and seven-year-old daughter, Amber. Their bodies were found in their Palmerston North home on 30 August 2000; the Crown claims Mr Lundy killed his wife for her insurance money and Amber because she saw what he was doing to her mother.

The prosecution last week wrapped up its case, hammering home its message Mr Lundy had brain on his shirt which came from Mrs Lundy.

The defence both opened and closed its case, having already called six expert, overseas witnesses.

Lead defence counsel David Hislop, QC, told the court Mr Lundy would not be giving evidence because he did not need to - he was not obliged to give evidence.

"After all, its the prosecution who brought him here, and they have to prove (their case)."

The jury had already seen DVDs of two police interviews with Mr Lundy, in which he screamed and sobbed when shown photos of his dead wife and daughter.

Mr Lundy told police he and his wife had no secrets and it was unlikely she could have been having an affair and kept it from him - before conceding he had kept his use of prostitutes from her.

"I kept secret the escorts because I didn't want to hurt her..."

Mr Lundy said he had no idea his wife had a pregnancy testing kit next to her bed until Detective Inspector Stephen Kelly told him, to which he said: "Shit. I didn't know that. God. Oh Jesus."

The trial has previously been told the Lundys had increased their life insurance from $205,000 to $500,000 soon before the deaths but that Mr Lundy had believed the lower amount would be paid out as they had not heard from their insurance broker Bruce Parsons that it had gone through.

However, in the interview with Mr Kelly, Mr Lundy said Mr Parsons had told him the higher amount would be paid out and admitted it looked "a little bit funny" in view of the deaths. The couple also had mortgage insurance, so their mortgage would be paid off.

Mr Lundy was formally cautioned at the start of the interview and, as it progressed, Mr Kelly told him he believed he was responsible for the killings before showing him photos of his dead wife and child.

Mr Lundy screamed and sobbed and told Mr Kelly he had thought he was a "top bloke" but not any more.

The defence has pointed the finger at Mrs Lundy's brother, Glenn Weggery, who found the bodies of his sister and niece.

On day two of the trial they inferred he had form for child abuse before the prosecution clarified they were talking about an incident with a 10-year-old relation when he was 12 or 13; he is now 45.

The defence put it to Mr Weggery he had killed Mrs Lundy and Amber because his sister had found out he was doing something he shouldn't have been with his niece - a proposition he vehemently denied.

Mr Weggery's flatmate at the time, Joanne Ridley, last week told the court he was baby-sitting her young son until nearly midnight on 29 August, and that she did not hear him go out at all after that. She was on the phone until about 2am, she said.

However, Ms Ridley also told the court she found a small blood smear the next day on a bathroom towel, which looked as if someone with blood on their hands had washed them and then dried them on the towel.

"It wasn't really that concerning to me. It was a fleeting thought. After the event you kind of second-guess yourself all the time," she said.

Ms Ridley became aware of the deaths and her girlfriend questioned whether Mr Weggery could have been involved, prompting the pair to go into his bedroom and examine his clothes and boots. They found nothing unusual.

A number of experts, both prosecution and defence, had all agreed matter found on Mr Lundy's polo shirt was CNS tissue from the brain or spine.

"No husband should have his wife's brain on their shirt."

However, that was not the only thing which pointed to him as the killer, he said; his car had unaccounted for kilometres on it, its petrol consumption did not add up and a fellow inmate of Mr Lundy's - known as Witness X - said the accused told him he was only there because his daughter had seen what he was doing to his wife.

The motivation was that the family was headed for a financial "catastrophe" thanks to Mr Lundy's unconditional $2 million purchase of land for a vineyard venture - despite having equity of only $19,000, Mr Morgan said.

"The car tells us how far he travelled, the shirt tells us where he went and who he did this to," he said.

"Witness X tells us why Amber had to go, too.

"This was committed by somebody who wanted to wipe Christine Lundy off the face of the earth.

Mr Lundy was the killer, and the jury should find him guilty, Mr Morgan concluded.

David Hislop, QC, told the jury in closing Mr Lundy was a cook and the central nervous system (CNS) tissue on his shirt was either not human or had got there as a result of contamination.

"He's a cook, and we know what's in chops, especially neck chops, in this country," he said.

Mr Hislop said a brainplex developed by the Netherlands Forensic Institute and used to conclude the matter on Mr Lundy's shirt was human CNS from the brain or spinal cord was untested and a developing science.

"It's not there yet. (It's) this man's life. He's not a laboratory rat, someone to try something out on."

Mr Hislop said the police had been tunnel visioned in their pursuit of Mr Lundy as the man responsible for the deaths; one officer had said he was the top suspect from day one.

He also questioned the integrity of a number of prosecution witnesses, particularly Witness X, who he said was dishonest, highly manipulative and wanted to work the system in his favour.

"Maybe it gives us a message about the state of their case," he said.

"One could almost hear the nails of the learned prosecutors scraping on the bottom of the barrel."

Mr Hislop said the trial had been a long journey.

"Human nature tells you he didn't do it.

"We say in the case of Mark Lundy, that the only right verdicts, the only safe verdicts, are those of not guilty."

Justice Simon France will sum up today and the jury will then retire to consider its verdict.