When it comes to waistlines, New Zealand is a country of thirds: it is the third biggest consumer of sugar and sweeteners per capita in the OECD; a third of New Zealanders are obese; and it is the third fattest country in the developed world. 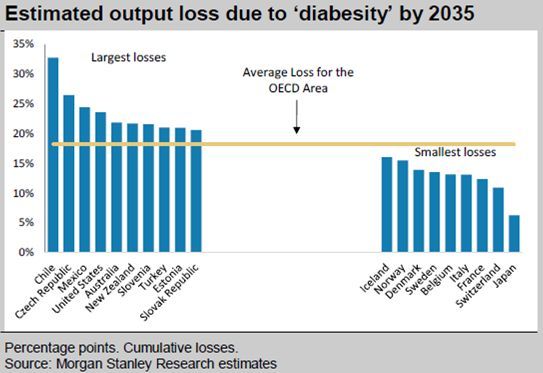 The annual cost of weight-related healthcare has ballooned to about $1 billion, and new research says it is going to act as a handbrake on future economic growth.

Tony Blakely, a public health professor, said sugar consumption strongly affected rates of obesity and diabetes*, and the report spells out just what this means for the economy.

"Diabetes is something we can keep people alive with, but it has a high morbidity, meaning that it becomes a fiscal drag - to use economic terms - on the economy, because people aren't as productive," he said.

"They're not at work as much, so we've got more people in hospital, more on dialysis or on other treatments for diabetes. And it hits people before they retire."

In New Zealand, 48 percent of Maori were classified as obese; the figure was 68 percent for Pasifica people, and rates were soaring among young people. For Pākeha, the rate was 29 percent.

The Morgan Stanley report said New Zealand's long term annual gross domestic product growth, of about 2.5 percent a year, would be cut to 1.9 percent, resulting in a more than 20 percent loss in productivity over two decades, because of obesity.

Institute of Economic Research CEO Laurence Kubiak said its research showed obese people did have an impact on the economy.

"There is a productivity loss, there is real no question about that," he said. "The bit we've been able to measure in New Zealand in that respect is absenteeism, and you know, obese people do have higher rates of absenteeism which obviously has a productivity impact."

It has found obesity was an intergenerational phenomenon and was also closely aligned with socio-economic status. 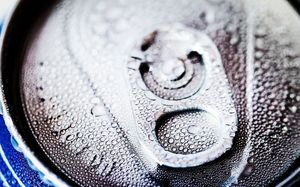 Boyd Swinburn has been arguing for taxes on sugar as well as other measures to fight obesity.

The Auckland University professor said any policy measure should be targeted to ensure maximum benefit, by discouraging sugar consumption.

"The public tend to be supportive of taxes, provided the money that's being raised from those taxes is used to offset the high cost of healthy food," he said.

Morgan Stanley's report also included a warning for manufacturers of high sugar foods that governments will eventually be forced to act to reduce sugar consumption.

Professor Blakely said while some aspects of the report were "perverse", such as highlighting that a decrease in sugar consumption should not have a negative effect on the pharmaceutical industry, viewing sugar as an economic deadweight was an important addition to the public debate and understanding of the true cost of obesity.

"Essentially what we have here is an issue that is normally seen as a health issue, that has now been reconceptualised as a productivity issue," he said.

"Then you tie it back to companies using sugar a lot, and what their exposure would be if we put taxes on soft drinks, or taxes on sugar."

He said the government had been slow to produce meaningful policy to fight obesity, although there were some good signals for action on childhood obesity.

The Morgan Stanley report warns that if governments fail to act, sugar consumption will rise - with a corresponding hit to the economy.