Educators are divided over using the promise of jobs and permanent residence to entice foreign students to this country.

Work rights and immigration points are regarded as important incentives for attracting international students in the face of stiff competition from countries including Australia and Canada.

Some say that is fine, but others worry the balance has tipped too far.

Official figures show 37 percent of the students who came to New Zealand five or six years ago stayed on to work, and in the 2013-2014 financial year, 42 percent of skilled migrants were previously students here.

Educators expect those percentages to grow because Indian enrolments are growing fast, and they are generally more interested in work and settlement in New Zealand than other student groups.

Education New Zealand chief executive Grant McPherson said employment and immigration had become more important for international students, but he did not believe tertiary institutions were making those the focus of their offering.

"We're not seeing that the international education providers are the pathway to employment in New Zealand, but that's not saying it isn't a pathway people will think about and explore."

But at private tertiary institution the Auckland Institute of Studies, president Richard Goodall told Radio New Zealand's Insight programme the emphasis on employment and settlement had changed the institution. 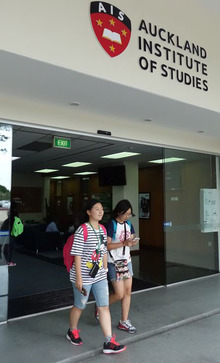 "We've decided we're actually in the education, settlement and work/employment business," he said.

"It's a much longer commitment nowadays, and I think a much healthier one."

The chairperson of language school association English New Zealand, Darren Conway, said it was appropriate to have a pathway to migration for foreign students.

However, he worried that some institutions were going too far in promising employment and residence.

"You can't sell what you can't guarantee. For example, if you're promising those sorts of outcomes it puts a lot more pressure on you to pass people doesn't it? So there's an ethical blurring there. And we don't as institutions control the settlement outcome so I do have some level of discomfort about the orientation of those sorts of organisations."

The Tertiary Education Union said some foreign students were dependent on their right to work in order to survive, and it was harming their health and their studies.

It was also unhappy some institutions were compressing lectures to a few days a month or scheduling them for weekends so foreign students had more time to work.

The chairperson of the union's Unitec branch, Sid Suha Aksoy, worried the immigration implications had not been fully considered.

However, the deputy vice-chancellor strategic engagement at the University of Auckland, Jenny Dixon, said New Zealand needed skilled migrants and the answer was good quality control on the institutions enrolling international students.

"We want highly skilled migrants to come here and stay," she said.

"It's about maintaining high quality programmes, high quality standards and then I think things should look after themselves."