It's the weirdest bits and pieces that stick in the memory from when you were a kid: slices of conversations; the smells of places and people; feelings. Some hold more than others.

In the early 1980s we started venturing from Westport to Christchurch for a summer or early autumn holiday. More often than not they happily coincided with cricket matches.

The car was always hot, we got motion sick a lot and mum and dad got frustrated.

The car sickness was so out of control that dad did stop stopping. We were to be sick into an ice cream container and keep going until it really became urgent. 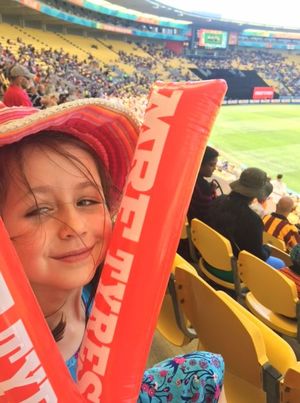 Eve Scanlon, will she remember her day at the cricket? Photo: Supplied

Somewhere on the east coast side of the Lewis Pass we started feeling better and the air guitars came out. By the time Christchurch could be seen through the dashboard we were starving and full of beans.

During the '80s our preferred food of choice came in one colour: golden. It matched the weather. There was no better place to find it than the cricket. For mum that often meant some blessed peace from three boys; cricket not quite being her wicket.

For us it was bliss... (To a child) Lancaster Park was an immense space, time with dad and during the breaks you got to play on the field.

The New Zealand team included great names - a young Martin Crowe and Richard Hadlee. The characters: John Wright, Ian Smith, Jeremy Coney and Chats. Everyone still wore their flannel hats; there wasn't a posh coffee machine in sight and the loos were not nice places.

The opposition could be fierce, none more so than the West Indies. The team we watched in 1987 had a bowling line-up which included the immense figure of Joel "Big Bird" Garner, Courtney Walsh and Malcolm Marshall.

On the batting side it wasn't any less brutal with Gordon Greenidge, Desmond Haynes, Richie Richardson and Viv Richards in the top four. They were a side still clinging to their pomp; much stronger than the one I will watch New Zealand play in Saturday's Cricket World Cup quarter-final in Wellington.

In 1987 we had lost the previous test by 10 wickets - a thumping. We were bruised and battered, like the hot-dogs.

The match went well for New Zealand. The West Indies were all out for 100 in their first innings, with Hadlee collecting six wickets. Martin Crowe then hooked and cut his way to 83, helping us to a first innings lead of 232.

The West Indies were stronger in the second innings, reaching 264. That meant we only needed 33 to win. Hot-dogs all round.

Then the West Indies started bowling. Garner and Walsh, tall men already, grew a foot and our batsmen shrank back to the changing room.

We were five down when Crowe, not out on the grand score of 9, carried us home.

Relief and happiness. How about some fries with that? Then back in the car. Can we do it again next year? Mum? Dad?

A couple of weeks ago I took my five-year-old daughter to the Sri Lanka v England match in Wellington - about two hours was her limit. She most liked the music, blow-up cricket bats and free bouncy castle.

Hopefully she will remember it, just a little bit, when she is older too.