A teenage murder-accused cut off his electronic anklet after first being picked up from his Avondale bail address by a friend in a car, police say. 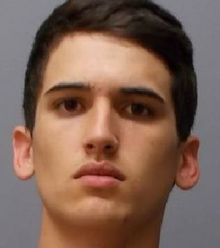 Beauen Wallace-Loretz, 17, is charged, with another teenager, with murdering 54-year-old Ihaia Gillman-Harris in a hotel room in Epsom on 27 December 2014.

"The police were actually initially contacted by the occupants of the address where he's bailed to. That was at 10.43pm last night.

Mr Beard said the teenager contacted the Department of Corrections shortly afterwards yesterday, and they tried to persuade him to give himself up.

He is charged along with Leonard Nattrass-Berquist, also 17, of Mr Gillman-Harris's murder.

The teenagers also face charges of robbing Mr Gillman-Harris of cash, a mobile phone and his bank card as well as taking his Range Rover. They are due to go on trial in November.