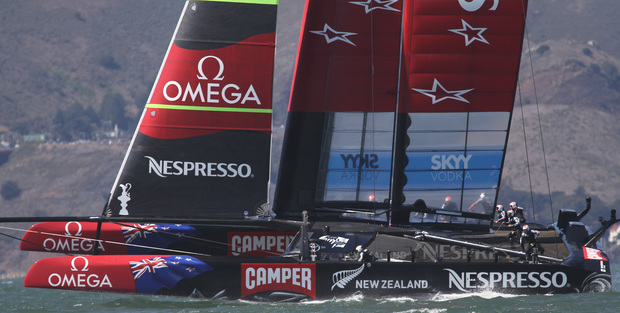 Emirates Team New Zealand battled it out against Oracle Team USA in San Francisco in 2013, but lost the series. Photo: AFP

Overseas media are reporting Auckland will be on the list to host a round of the build-up series for the 2017 Cup now that Sydney has pulled out.

The Government has previously said that hosting an event in New Zealand in the lead-up to the cup challenge in Bermuda in 2017 would enhance the case for government sponsorship.

Team New Zealand met with Auckland's event agency ATEED last week but none of the parties are commenting.

And Economic Development Minister Steven Joyce would yesterday only repeat the Government's view.

"I'm not in a position at this point to confirm the discussions with Team New Zealand but I can tell you as I said previously we were much more interested in sponsoring the team if there was a New Zealand leg to the thing - that's in the public domain."

The America's Cup event authority will announce early next month where the build-up regattas will be held, and Mr Joyce said as soon as that occurred the Government would be in a position to say what it was doing.

America's Cup commentator Peter Lester told Nine to Noon it appeared the deal will go ahead.

"For New Zealand and for Team New Zealand it's huge. The only reason you get offered this challenger series or a part of it is if you have a team in the event."