Australian fishing vessel Antarctic Chieftain is now clear of ice in the Southern Ocean and is being escorted to New Zealand, Maritime New Zealand says. 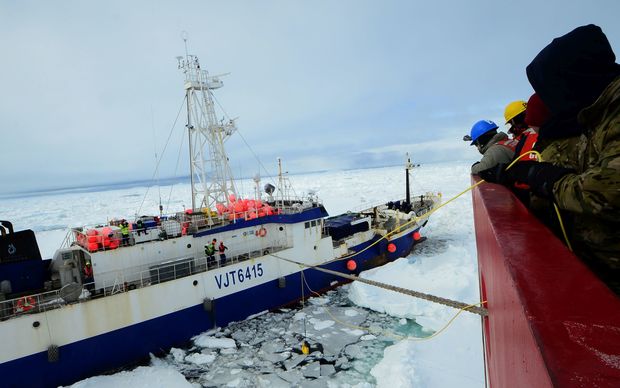 The 26-strong crew of the Antarctic Chieftain, including 13 New Zealanders, become stuck amid ice floes last Wednesday after the boat's propellor was damaged.

A US Coast Guard icebreaker, the Polar Star, reached the vessel on Saturday and towed it through ice floes up to four metres thick.

Maritime New Zealand said the vessel was now using its own engines in open water and had met up with with a Talley's fishing vessel, the Janas, which would escort it to New Zealand.

Speaking to Radio New Zealand from the Polar Star, Commander Kenneth Boda said the voyage was fraught with difficulty and the tow line broke twice during the rescue. 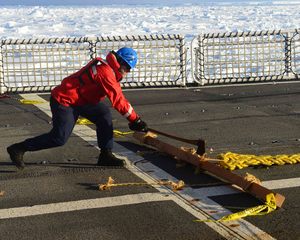 The first time a deck fitting on the bow of the Antarctic Chieftain was broken. On the second occasion, a towing bridle which had been configured to ease the pressure on the fishing vessel broke.

"After that happened we decided to call it a night. We all shut down for about eight hours, got some sleep, and picked up the tow this morning [Sunday]."

The tow progressed slowly, at barely a walking pace. Commander Boda said although the ice was new, first-year ice, it was thick and the pieces were big.

Ice that big posed major difficulties to the tow, because while the icebreaker with its reinforced hull could cut right through it, the fishing vessel could not.

Adding to the difficulty, they could not go around the ice for fear it may get trapped between the two vessels.

He said stopping and starting as they went through the ice made for a challenging tow.

"It's especially challenging when pieces of ice that we try push aside for them end up in between us, and them, behind us," he said.

"They could really capsize in this situation if a big piece of ice pushed them over." 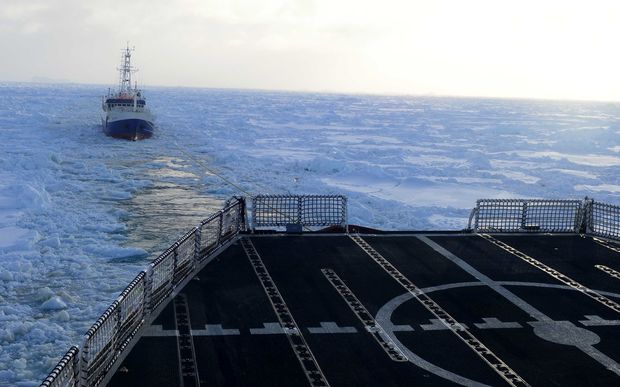 The Antarctic Chieftain being towed by the Polar Star. Photo: US Coast Guard / George Degener

When the Polar Star reached the damaged vessel, it was trapped by thick ice that had blown in from a storm earlier in the week.

"[There was] 100 percent coverage of ice. Six feet thick, with two feet of snow cover on top, and they were surrounded by icebergs.

"I've never seen so many icebergs in one place, I think I counted about 40 icebergs in the general vicinity where they were." 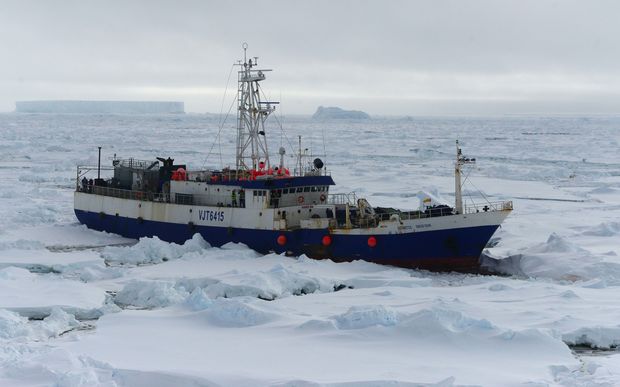 When the icebreaker arrived, Commander Boda said the crew of the Antarctic Chieftain appeared very happy to see them.

"You could tell there was a great sense of relief by the crew," he said. "We sent them over some cookies because it was Valentine's Day."

Around midday yesterday, the vessels reached a polynya - an area of water within the ice floe - which made for easier towing.

By last night, the Antarctic Chieftain was using its own power to head towards open water.

The Antarctic Chieftain called for help on Wednesday after it damaged its propellor trying to break through ice floes in the Amundsen Sea.

The vessel was licensed to harvest Patagonian toothfish in the Southern Ocean.

It sails under an Australian flag and is operated by Australian Longline, which is half owned by Sealord.