The South Island has had its driest January in 43 years and large parts are now officially in drought.

Most of Otago, Canterbury and Marlborough are affected after the driest January the mainland's experienced in 43 years.

A watching brief is being kept on Wairarapa.

Radio New Zealand's Conan Young traveled to Opuha in South Canterbury for today's announcement, where a lake supplying irrigation to 250 farms is just 13 days away from having to turn off the tap altogether.

The drought declaration comes with an extra $200,000 for rural support trusts to provide grants to farmers.

Mr Guy said tax breaks would be made available and farmers would also be eligible for Work and Income benefits.

"This is the driest it's been in January in the South Island for 43 years, and if you look at what's happening with rural fires, they are just popping up all over the place at the moment, it's a real concern." 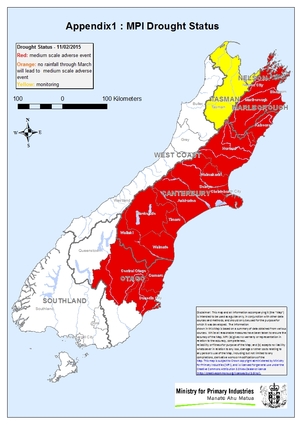 The minister said the government had taken social and economic factors into account and feed availability.

The extra help was unveiled on the shores of Lake Opuha.

Opuha Water CEO Tony McCormack said the lack of rain meant that for the first time in its 17-year history, there is not enough water in the lake to continue supplying much needed irrigation to farmers.

"We've already got about half of our farmers not irrigating, on total bans, a lot of those have been on restrictions for five or six weeks, but in 13 days it is everyone, no one gets any more water."

Mr McCormack said for dairy farmers this would mean an early end to a milking season that normally has another three months to run.

He said there were no guarantees but he was hopeful the lake would fill up again over the winter.

"Well I would expect so, I mean all statistical, historical information says that in that period there was enough to fill the lake, but we haven't seen these conditions before, going into winter." 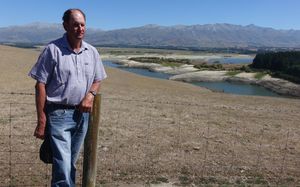 David Williams farms 2500 hectares of sheep and cattle near Lake Opuha and relies on the lake to irrigate his paddocks.

The fourth generation farmer said he had already had to de-stock in anticipation of the lake drying up and said others were doing the same, which has led to low prices.

He said once the tap was turned off altogether, decisions would have to be made about whether to sell off the main part of his flock.

"When you start getting into your capital stock, you're actually cutting down the capacity of the property into next year's income, well, we are almost at that point now."

South Canterbury farmer and Irrigation New Zealand chair Nicky Hyslop said river levels in the region were the lowest they had been since 1964.

"Timaru District Council have put restrictions in place that they haven't seen since 1974, so its very dry. Some of that was due to the kind winter we had last year and therefore a huge lack of snow and ice."

Mrs Hyslop said, without the Lake Opuha scheme, the region's farmers would be in a much worse state and there was a need for further irrigation across Canterbury.

The help being offered to farmers from today is available for the next six months.