New Zealand's first-ever coloured coin has been released to commemorate the centenary of the ANZAC landings at Gallipoli. 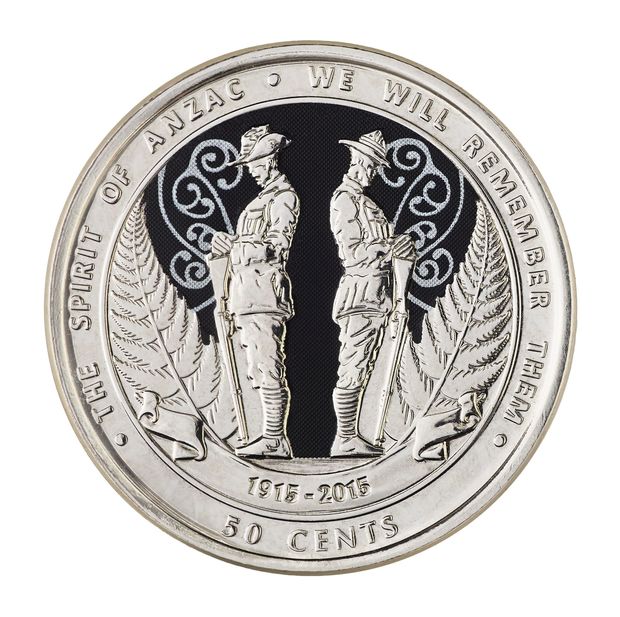 The 50 cent coin was released by the Governor-General Sir Jerry Mateparae at an event at Government House in Wellington on Tuesday morning.

Watch the making of the coin

He said it is the first coloured commemorative coin to be circulated in New Zealand's history and it is expected to be highly sought after.

The Reserve Bank has made one million copies of the coin to represent the size of New Zealand's population 100 years ago.

It will be in circulation as legal tender and available for collectors.

It is part of New Zealand Post's wider five-year stamp and coin programme commemorating the centenary of World War One and honouring the role in the war of staff from the Post and Telegraph Department - a precursor of New Zealand Post.

Mr Roche said "the coin features New Zealand and Australian soldiers standing back to back with their heads bowed in remembrance. The mangopare (hammerhead shark) pattern symbolises strength and determination, and the silver fern reflects New Zealand's national identity." 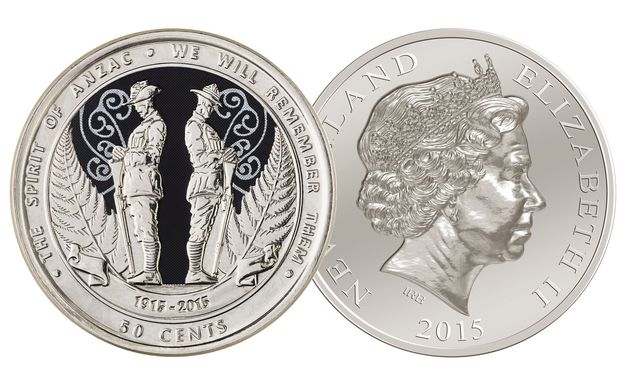 Both sides of the new ANZAC commemorative coin Photo: RBNZ

To represent New Zealand's national colours, the mangopare is coloured white on the coin, with the background coloured black, Mr Roche said.

Sir Jerry Mateparae said the coin represents the comradeship forged between New Zealand and Australia 100 years ago, far away from home on the shores of Gallipoli.

"This coin is a symbol of our nationhood. It reminds us of the events that occurred at Gallipoli. It helps us to remember the New Zealanders who served there and all those who have served our country during times of conflict and peace, and it is evidence that the links with Australia and the ANZAC spirit endure."

The coins have been minted and colour stamped by the Royal Canadian Mint, using a special 'print pad' technology.

The ANZAC circulating coin has the same specifications as the existing 50 cent coin and testing has shown it will be accepted in coin and vending machines.

Groups representing former and current armed services, including the Royal New Zealand Returned and Services' Association members and Defence Force personnel, will be given the opportunity to pre-order a limited number of coins from today.

The coins will be made available to the public to pre-order from 23 February 2015.

The coins will be released publicly in PostShops and Kiwibank branches nationwide on 23 March 2015 and sold at their 50 cent face value.