A top-ten hit in each of the last three decades, Patea Maori Club's 1984 smash Poi E is being turned into a movie.

Poi E: The Story Behind Our Song tells of the ground-breaking fusion between 1980s pop and traditional Maori music, and reveals much about the man who co-wrote the hit, Dalvanius Prime. 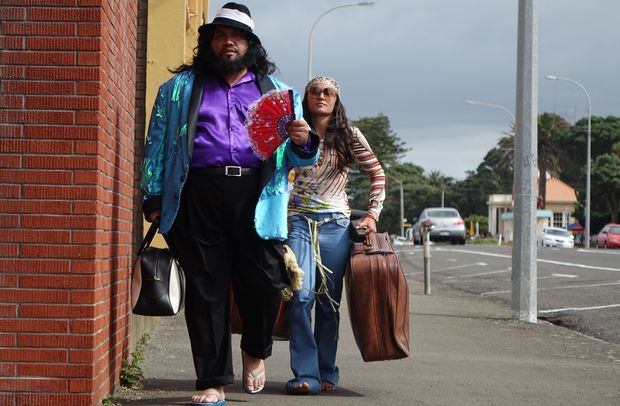 Maaka Pohatu, as Dalvanius Prime, and Summer Mokomoko, as Barletta Prime, in a scene from the movie. Photo: RNZ / Robin Martin

The film's writer and director, Tearepa Kahi, says Poi E had a huge impact on him growing up in the Christchurch suburb of Papanui and when he heard it was 30 years since its release, he thought it needed to be celebrated.

"For me, it represents one of the greatest, happiest moments of my childhood, the first time I saw a community - a Maori community, the people of Patea - singing this awesome waiata and having this great breakdancer on top of the waka.

"It was this great big fusion of energy and for me it brought new light to what it was to be a Kiwi, because I hadn't seen this on TV before. So it was a personally moment but also an important cultural touchstone for us."

Popular belief has it that after the Patea freezing works closed in 1982 Dalvanius returned home from a successful entertainment career in Australia to help the town out.

But the director said the real story was far more complex.

"I sort of thought it was prodigal son returns to make good and revive this community, but it is actually much more personal than that," says the director whose previous work includes Mt Zion.

"It was prodigal son returns, discovers the decimation in the community but he's come home to nurse his mother so it wasn't like he's coming to the aid of everyone else. It's a son returning to his mother.

He said Dalvanius undertook a personal journey to find his place in the Patea community, embrace te reo and better understand his identity, which culminated in the writing of Poi E with Ngoi Pēwhairangi.

"He's openly said he wasn't a kapa haka man, he was a singer and an entertainer, and he cut his teeth in Australia as a cabaret singer and he brought disco to Australia.

"What we've been fed is 'cool he came home and helped everyone else out', but it's much more personal and it's that personal story which shed more light and has more depth." 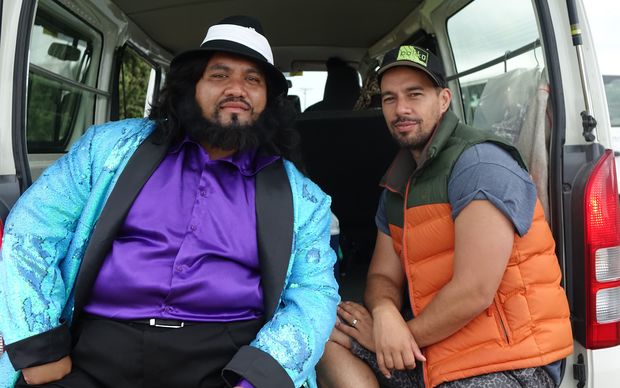 Actor Maaka Pohatu, a relative of Dalvanius Prime, admitted to being a little apprehensive about portraying the entertainer.

"You get a little bit nervous because you are representing someone's whanau, you're representing like an actual uncle a well loved and well known person especially in Patea, but I do whakapapa to Dalvanius through my family which makes it a bit safer," said the actor, who has previously appeared in Two Little Boys and performs in The Modern Maori Quartet.

One aspect of the role definitely not causing him any angst is the opportunity to dress in the famously ostentatious style of Dalvanius.

"Yeah man, it's pretty fabulous. The gear is pretty funky, pretty out there. At the moment I'm wearing a paua sequinned suit, it's pretty rad."

Poi E enjoyed a second life when it hit the charts on the back of a Vodafone ad campaign in 2009 and then shot to number three after featuring in Taika Waititi's film 2010 Boy.

Dalvanius' sister Barletta says she didn't immediately hear a hit record in the unusual fusion of 80s hip-hop and traditional Maori kapa haka, but her brother always had faith in the song.

"I didn't but Dalvanius had a big idea that it would be a huge success and with him and Ngoi Pēwhairangi wanting to promote te reo Maori through music, it was more or less both their dreams too." 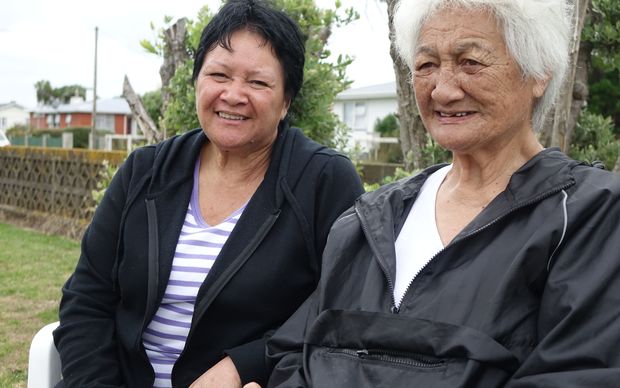 Barletta Prime is thrilled a movie is being made about Poi E, which is still the only song entirely in te reo Maori to reach number 1 in New Zealand, and she says her brother, who died in 2002, would be too.

"I think it is fantastic because it is a great song and it has a great story with it and Dalvanius would be so proud. He'd be proud of everyone who's in it and mostly proud because the song is still carrying on after all these years."

After working with the members of the Patea Maori Club, Tearepa Kahi has a better understanding of Poi E's longevity.

"They are the most exciting 70-80 year-olds I've ever been around in my life and the fact there is this great big reservoir of energy deep inside each and every one of them speaks to life that remains in the song."

He said the legacy of Poi E was that had become intergenerational and every Monday rehearsal was packed with the original performers and their grandchildren who were taking on the mantle of what it meant to be part of the Patea Maori Club.

"So the fire is still burning and we're just hoping to stoke that fire some more."

Poi E: The Story Behind Our Song is being released through Sony Pictures New Zealand and is due to be released in August this year.