Campaigners in New Zealander are seeking an official pardon for men who were prosecuted for being gay. 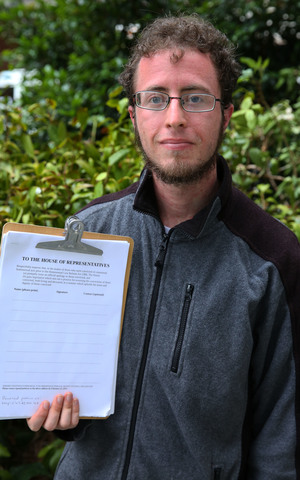 In Britain a petition backed by actors Stephen Fry and Benedict Cumberbatch and other public figures is seeking an official pardon for almost 50,000 men convicted under similar laws formerly in place there.

That petition has gained more than 60,000 signatures so far.

New Zealand petition organiser Wiremu Demchick said he was confident he would have 3000 signatures to present to Parliament by the end of the month; so far he had 142 signatures.

"This would be a formal acknowledgement if nothing else as to the fact that we as a society acknowledge that that was wrong and are seeking to, the best that we can, remedy the situation," he said.

"I'm organising a petition to the house of representatives, basically asking them to try to, as much as one can do 30 years after homosexuality became legal in New Zealand, to try and remedy the situation that we have at the moment where we have gay men who still have criminal records.

"I think many people find that actually quite disturbing and want to remedy that."

Mr Demchick said he was not calling for convictions which were still illegal to be pardoned, such as homosexual acts involving minors.

The issue was wider than just those with convictions, he said.

"I think it's an important thing for both the men who were convicted under this legislation, and for wider LGBT (lesbian, gay, bi-sexual and trans-gender) community.

"The reason I say that is there's still quite a lot of stigma there, and while men no longer have to live in fear of convictions under the old legislation, obviously, they still have to live with the fact that for many years they either had to be in secret or face quite serious risk of prosecution.

"I think this would be a formal acknowledgement, if nothing else, as to the fact that society acknowledges that that was wrong and are seeking to, the best that we can, remedy the situation."

Any apology to gay people would follow a series of other government apologies for historic discrimination, such as to the Chinese and Samoan communities and to several iwi.

But Justice Minister Amy Adams said pardoning past homosexuality convictions was problematic and would be easier said than done.

Ms Adams said she had received general advice on wiping past convictions, which warned against taking a broad brush approach because a number of historical offences still applied today.

"The issue of wiping past homosexuality convictions requires careful consideration. It's not a simple matter and would be difficult to look at an offence retrospectively," she said.

However, she was happy to hear submissions on the issue.