Former weightlifiting gold medallist Tony Ebert has praised the firefighters who rescued 14 medals from his home after it was severely damaged by fire.

Five fire trucks were called to the Commonwealth Games champion's Campbells Bay home in Auckland just after 8pm yesterday, and stayed until 6.30am today dampening down hot spots.

Mr Ebert said the fire appeared to have started after an ember from his wood-fired barbecue caught alight under the deck.

"We were having a barbecue but the both my gas bottles were empty so I built a traditional barbecue in a great big Weber bowl.

"We cooked our meat then went inside for a couple of minutes ... then my wife turned around and the flames were up well above the roof height."

Mr Ebert said the Fire Service, which has been investigating the cause of the fire at the property this morning, believe a cinder from the barbeque may have been sitting under the deck for 30-40 minutes before catching fire.

"The fire just ripped through it (the home) and then the gas bottles started exploding so it was a bit like a war zone. I got the hose and advanced towards the fire, but realised how realised how pathetic that was, my hose was dribbling water out and the flames were about five metres high," he said.

The senior station officer at the Takapuna Fire Station, Steve Callagher, said the deck and surrounding bush were "tinder dry", and combined with the sea breeze that blew into the cliff top property, were the most likely factors contributing to the blaze spreading so quickly.

Tony Ebert said about two thirds of his home had been destroyed - but he's glad at least the medals could be saved. He won gold at the Commonwealth Games in 1974 and silver at the Edinburgh Games in 1970.

"It was part of the history of living and remembering some pretty exciting times, which were now 40 years ago, but it's nice to have that memory there."

He heaped praise on the firefighters who retrieved the medals once the fire was under control.

"They were all masked up so they went in. There was no danger just a lot of smoke," he added. 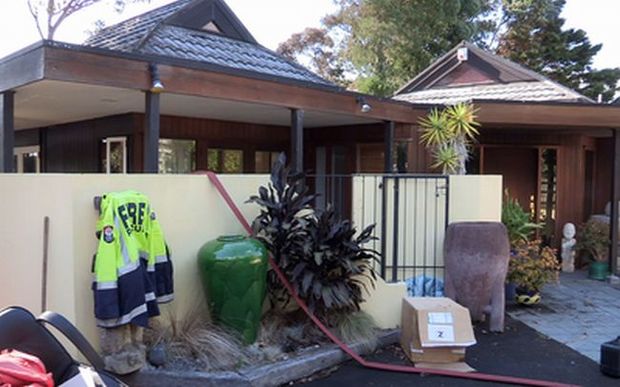