A project to drill 1.3km into the South Island's giant Alpine Fault has been halted tantalisingly close to its final goal.

A team of scientists has had to stop drilling with the borehole at 893m, which they estimate was as little as 100m short of the fault itself.

The latest drill site at Whataroa, north of Franz Josef, was the ninth and easily deepest hole the team had managed in the past five years, with the others 150m or less.

However, GNS Science project co-leader Rupert Sutherland said it was a much more interesting and rewarding drilling site than had been imagined.

The group discovered that temperatures increased by more than 140°C for every kilometre below ground. Such a temperature rise had important implications for the way rocks behaved and for understanding quake processes.

Dr Sutherland said they had discovered temperatures as high as 110°C at the bottom of the hole, which could be used to generate electricity.

"The actual geothermal gradient that we're looking at - so the rate of temperature increase with depth - is of the order in our borehole of 153°C, which is actually very similar to the Taupo/Rotorua region, where there is commercial geothermal energy."

Among the rock samples recovered from the borehole, they also found a large amount of graphite - a low-friction mineral that could have implications for the fault's strength.

Dr Sutherland said the decision to stop drilling was made after a steel casing inside the borehole was damaged and could not be repaired.

"We have learnt a vast amount about the structure and hydrology of the upper zone of the fault and about drilling in this challenging environment. Despite pulling up early in terms of depth, we are really happy with the technical and scientific achievements of the project.

"It is definitely feasible to reach all the way to the fault and we are keen to attempt this in the future. The very high rate of temperature increase with depth means that deeper drilling may enable us to sample rocks and fluids and document processes that usually happen at totally inaccessible depths." 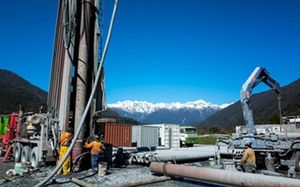 The borehole would become a permanent 'observatory' providing information about conditions inside the fault.

GNS Science said the project was an international first and there was much interest in the results because it involved a fault that was due to fail in a large quake.

The Alpine Fault had a high probability (estimated at 30 percent) of rupturing in the next 50 years. Such an event would produce one of the biggest shakes since European settlement.