The Ministry of Foreign Affairs and Trade (MFAT) has updated its travel advice for France, asking New Zealanders there to take extra care and follow the instructions of authorities. 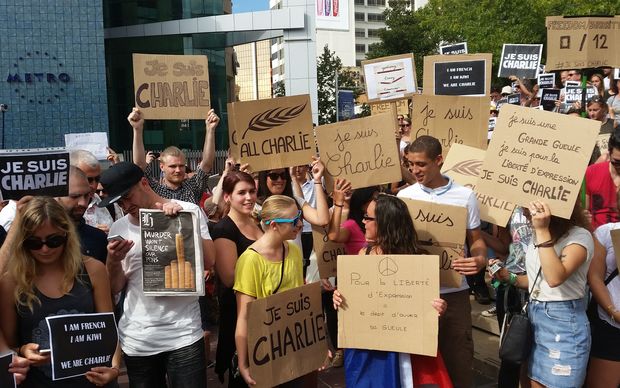 About 400 people attended a vigil for the victims of the attacks at Aotea Square in Auckland on Friday. Photo: RNZ / Lauren Baker

Its SafeTravel website said terrorist groups continued to plan and threaten attacks in France and New Zealanders should be cautious.

New Zealanders travelling or living in France were being encouraged to register their details with MFAT.

However, the Government Communications Security Bureau (GCSB) said there was no heightened alert in New Zealand following the terrorist attacks in Paris.

The minister responsible for the spy agency, Chris Finlayson, said any armed incident was an opportunity to learn and identify lessons that could help in future events.

New Zealand's security alert status was raised from its lowest setting of "very low" to "low" in October, as announced by Prime Minister John Key.

Mr Finlayson said people should not be frightened by the change in the alert level.

A religious vigil will be held in Wellington this afternoon to denounce this week's terror attacks in France, which began with the killing of 12 people at the satirical magazine Charlie Hebdo in Paris.

Jews, Christians and Muslims will gather for a prayer vigil at the Kilbirnie Islamic Centre at 3pm.

Dave Moskovitz from the Wellington Council of Christians and Jews said Charlie Hebdo published material which was deeply offensive to many religions.

However, he said life was sacred and there was no possible excuse for killing someone for something they have said or written.

Muslim member Sultan Eusoff said New Zealand Muslims were dismayed by the killings, which they view as counter to the teachings of the Koran.