The New Zealand Transport Agency says it is not aware of any moves to restrict vehicle access to beaches, despite a spate of beach accidents in the past two days - two of them fatal. 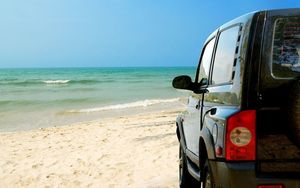 A 24-year-old man was killed when a four-wheel-drive vehicle flipped on Papamoa Beach near Tauranga yesterday, and a 50-year-old man died after crashing his motorbike in sand dunes at Port Waikato on New Year's Eve.

An agency spokesperson, Andy Knackstedt, said beaches were specifically defined as public roads to give authorities the power to enforce safety rules.

"Historically, beaches are classified as a public road really so that police can enforce traffic regulations and safety rules on those beaches where vehicles do have access."

He said it would be up to the Ministry of Transport to make any changes and, as far as he knows, there are no plans to do so.

In other beach crashes, a motorcyclist suffered serious injuries when his bike hit an unknown object while riding on the beach at Pouto Point, near Dargaville, on New Year's Eve.

Two people were also injured in a collision between two four-wheel-drive vehicles on Muriwai Beach, Waitemata, on New Year's Day.