New Zealander Philip Blackwood is due back before a Myanmar court today, along with two local men, to face trial on religious charges. 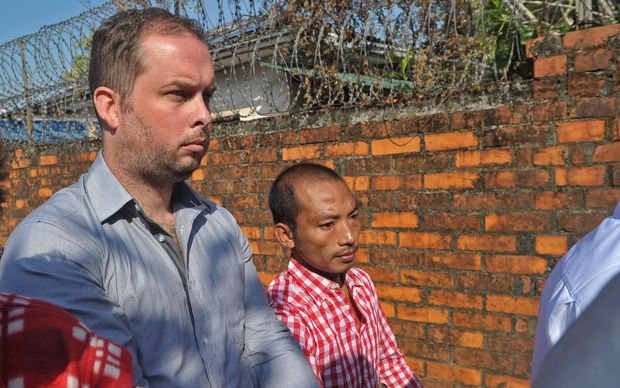 The trio, who ran a bar in Yangon, were accused over a flyer promoting a drinks event depicting Buddha wearing headphones.

They faced possible jail terms if found guilty of breaching the Religion Act with the poster - which was quickly withdrawn from the bar's Facebook page after an outcry.

The trio made their first court appearance last week and all three were denied bail.

The trial could take up to six months.

Mr Blackwood's wife is also in Myanmar, but has been denied permission to see him in Yangon's notorious Insein Prison, which also houses many of the country's political prisoners, and has been described by human rights campaigners as the "darkest hell-hole in Burma".

Amnesty International's New Zealand director Grant Bayldon has described the charges as out of proportion to the offence, and says Mr Blackwood's continued imprisonment as outrageous and unacceptable.

He said the religious offence law is one of a number of unjust laws in Myanmar.

Following the arrests, the nightclub issued an apology online:

"VGastro management would like to express our sincere regret if we have offended the citizens of this wonderful city, who have welcomed us so warmly and generously.

Our intention was never to cause offence to anyone or toward any religious group. Our ignorance is embarrassing for us and we will attempt to correct it by learning more about Myanmar's religions, culture and history, characteristics that make this such a rich and unique society.

We thank the citizens of Yangon for their patience and kindness and sincerely hope that our apology will be accepted."

Members of the public had been joined by monks from the fundamentalist Buddhist group, "ma-ba-tha", to protest in front of the bar, prompting police and local authorities to intervene.

Articles 295 and 295(a) of the penal code under which the three have been charged read, respectively: "Injuring or defiling place of worship, with intent to insult the religion of any class"; and "Deliberate and malicious acts intended to outrage religious feelings of any class by insulting its religion or religious beliefs".

While the idea of the Buddha's image being sacred is not emphasised in the form of Buddhism practised in modern, urban Asian and Western cities, in Myanmar Buddhist objects, texts and teachings are regarded as having protective and even magical qualities.

An image of the Buddha was regarded as having the power to protect Buddhist followers.

The DJ-like Buddha image was regarded as offensive to many Buddhists in Myanmar as it is regarded as warping the perception of protective power offered by a Buddhist image in general.

In the west, the teachings of Buddhism relating to "letting go" and non-attachment are often the central focus, and it could be argued the use of an image like that of the bar would not offend because the Buddhist is not attached to such material things.

But many people in Myanmar, where Buddhism was the national religion, do not practice in this way.

For them the importance was associated with honourable behaviour; The Buddha (and his image ) is sacred for his honourable and ethical deeds, and the example he sets.

The trial would focus on whether the use of the Buddha image was harmless - and surely the Buddha, being free from all attachment would not have taken any offence - or whether it can be argued the Buddha was not simply an ordinary person but a holy figure who has been insulted.

Unfortunately for Mr Blackwood and his co-accused , the Court in Myanmar was very likely to take a more traditional line on the alleged offence caused.