The Supreme Court has decided it will not intervene in a landmark case over low pay rates in the aged care sector. 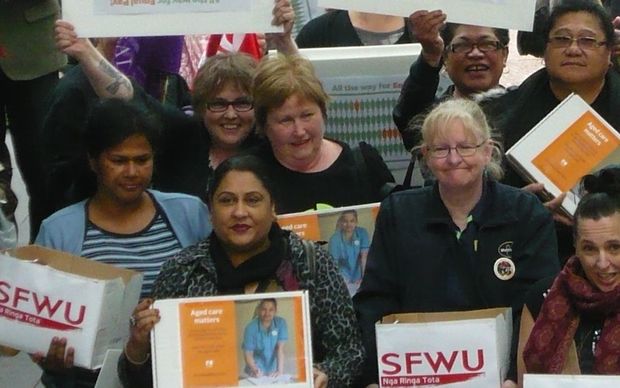 Aged care workers and union members when they presented a petition to the Employment Relations Authority in Auckland in October. Photo: RNZ

The Service and Food Workers Union said the decision now cleared the way for workers to argue their case for better pay in the Employment Court.

The Appeal Court last month backed an argument by Lower Hutt worker, Kristine Bartlett and others, that aged care workers were paid less because of the high proportion of women in the industry.

It told the Employment Court to work out how pay rates in other industries could be compared.

Resthomes responded that pay parity would have far-reaching implications and asked the Supreme Court to intervene.

The union said the decision by that court today opened the door to a faster resolution of the long-running row.

But Aged Care Association chief executive Martin Taylor told Checkpoint the case had the potential to impact upon every workplace in New Zealand and that it was far from over.

"What we have to do now in the Employment Court is establish the principals by which we establish what is a fair rate without the bias of gender discrimination," he said.