The staff behind Auckland's rescue helicopters had a problem when they decided they needed a flight simulator to help train their pilots.

There was simply nothing available to replicate the real-life BK117 aircraft they use to save lives around the region - so they decided to build their own with amazingly accurate results.

It has taken about three years to complete the home-made flight simulator which is tucked away just off the Auckland Rescue Helicopter Trust's main base.

It feels, sounds and vibrates like the helicopters they use every day.

The trust's chief pilot, Dave Walley, said it is the most realistic twin-engine helicopter simulator in New Zealand.

"To have a simulator is an amazing benefit because it allows you to simulate bad weather without actually being in the bad weather.

"It's so real that the first time I flew it I actually experienced fear, and that's a very interesting concept," he said.

The flight simulator was made by a small dedicated team of staff for about $170,000.

And they expect it to save the Auckland Rescue Helicopter Trust about $200,000 each year.

The simulator also avoids any training accidents that could cost tens of millions of dollars and result in loss of life. 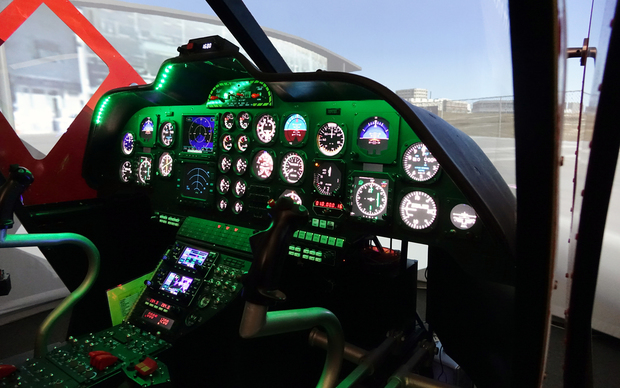 Co-creator Armin Egli is a pilot who has worked at the trust for over a decade as a training manager.

"It was a huge undertaking right from the start... we felt it would be quite nice to have a real aircraft that we can simulate and learn emergency procedures.

"It's pretty sophisticated, we've used a lot of modern new features in building it - in the early stages I started to draw a lot of the parts in 3D and print them in 3D," he said.

In fact, the only pieces that are actually from a real helicopter are the seats, and the sun shield above the state-of-the-art instrument panel.

The instruments are dazzling series of high-tech rear-projection screens and perfectly replicate the real things.

Another pilot who helped create the simulator is Mike Zeff, who was able to put his skills as a former Microsoft employee to use.

"We have the vibration that makes it feel like it's starting and running, it just adds that little bit of realism.

"Where ever we can we've gone for 100 percent realistic to make it more convincing for the pilot... it's not a toy or a game, it's very much a training tool" he said.