The neighbours of a house in Upper Hutt where an axe attack took place last night say they are now afraid to let their children out of the house as a result of the events.

In the incident, a 55-year-old woman died and two men were seriously hurt, and are in hospital.

Their injuries were not life threatening.

A fourth victim was a woman, age unknown, who received minor injuries.

The other two neighbours who did not want to be named said they were now fearful following the attack.

Colleen Noble, a neighbour of one of the men hurt in the attack, said he came to her door seeking help.

"My neighbour come from next door - the guy that was attacked - he knocked at the door and he said that him and his mother had been attacked by a man with an axe," she said.

"He had his jumper wrapped around his arm. It was covered in blood. He had wounds on his back. He had a tee shirt on and there was blood dripping off him."

Mrs Noble said the man was carrying an axe and that he had taken it from the attacker. "I took the axe off him, yelled out to my son and then my son rang the police."

Another neighbour Shane Traddear said he had come outside to work on a car when he heard yelling.

He said he then saw a man without a top on running down the street. 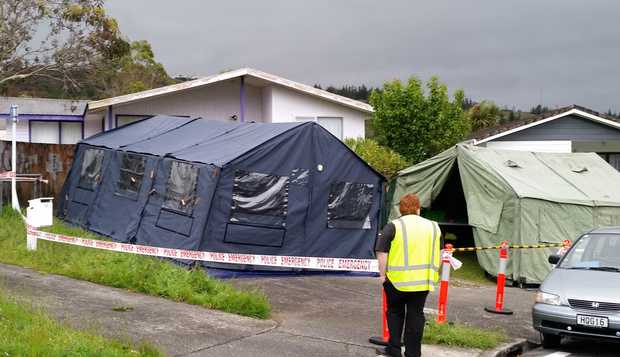 Retimana Te Korou Nicholls, a 36-year-old contractor of Upper Hutt, was charged with murdering the 55-year-old woman during the attack in the suburb of Timberlea last night, and causing grievous bodily harm to two men.