Ministers this morning unveiled the results of a government inquiry into the dairy contamination incident, which triggered the botulism alarm in August 2013.

The report showed the government and Fonterra did not trust each other when it came to food safety, with the dairy company unwilling to trust the Ministry for Primary Industries.

Other criticisms of Fonterra's response include its lack of a crisis plan, the time it took to alert the Ministry and its customers, and trace affected products and communications failures. 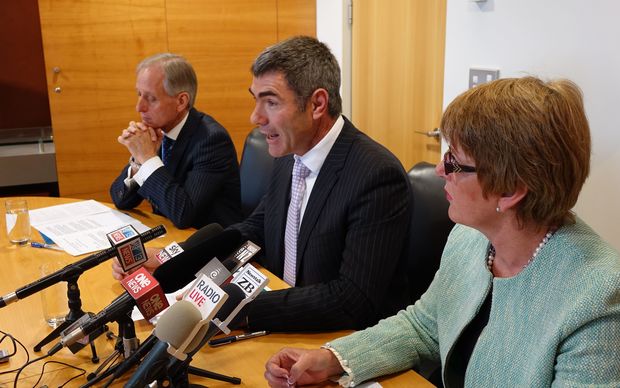 The report broadly endorses procedures the ministry put into effect when the scare happened but said there could be improvements.

Primary Industries Minister Nathan Guy said the report placed the entire responsibility for the botch-up on Fonterra which was seriously deficient in tracing its affected product.

"It lays the blame at the feet of Fonterra," said Mr Guy.

Mr Guy said his ministry had already taken steps to improve its procedures, but he would accept all the recommendations of the report.

"Part of those recommendations have been about how the industry works together and that work is well under way ... so I think you're seeing today a much better co-ordination and partnership approach already."

"The report indicates that the super ministry that was formed by the National government is nothing more than a super muck-up.

"The responsibilities for food safety have clearly been compromised. The reviews that were supposed to be done of food protocols did not occur from 2011. There's a lot in this report that needs to be very seriously considered."

The Greens say the report shows the ministry failed to follow its own protocols.

Its primary production spokesperson, Steffan Browning said there was no point establishing procedures to deal with those types of incidents if the Ministry did not follow them.

Subsequent tests ruled out botulism, but Fonterra had to rebuild its reputation after the episode and it is still facing a multimillion dollar compensation claim from French food giant Danone.

In October last year, a report commissioned by the dairy co-operative itself listed a series of failures in its handling of the scare. 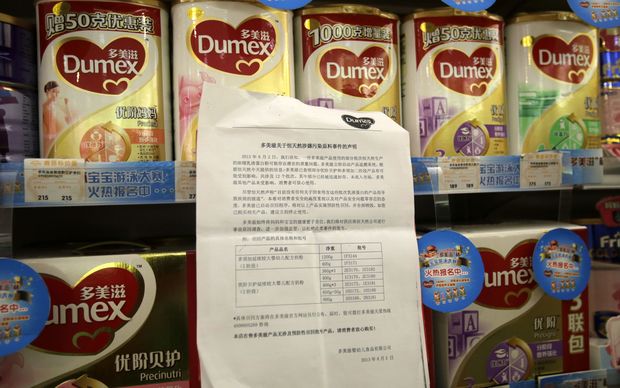 A recall statement posted in a supermarket in Wuhan, China, on 7 August last year. Photo: AFP

An infant formula maker in Auckland says his company is losing out on $12 million a year due to Fonterra's botulism scare.

Peak Formula chief executive Stephen Julian said since changes were introduced to export and import requirements into China as of May this year, it had not been able to fit the criteria to supply its businesses there.

He said as his company was a brand owner and not a manufacturer, it had been put in a different category and did not meet the standards in China.

Mr Julian said the repeated failures to fix the processes that Fonterra has had in China over the years was to blame, and last year's scare was just the tip of the iceberg.

Infant Formula Exporters Association chairperson Michael Barnett said it should not have taken the incident to happen for changes to be made by the dairy company.

"I think the question many would be asking is 'should it have been a watershed moment or should this just have been the high standard that most New Zealanders thought that Fonterra would have had'."

The Ministry for Primary Industries and Fonterra should have had a rehearsed plan for major incidents in place, Mr Barnett said.

Food Safety Minister Jo Goodhew said if Fonterra had let the Government know earlier about its botulism contamination incident last year the outcome could have been different.

She said it had many opportunities to alert the Government to its predicament but did not.

Ms Goodhew said it was vital companies like Fonterra had a food safety culture.

The report criticises the Ministry for Primary Industries for having no single coherent crisis plan for a food incident that it could put into effect straight away after Fonterra belatedly informed it of the botulism alert.

It said the Ministry deserved credit for many aspects of its response, but it should have had better documented decision-making processes, used more rigourous science-based risk assessment and co-ordinated better with the industry to avoid unnecessary confusion among consumers and others.

The final report makes nine recommendations and Ms Goodhew said the Government would be implementing them.

"They call for MPI to work with the dairy industry and verifiers to advise and ensure strict compliance with the rules. We need to continue to work towards readiness for a food safety response and I can assure you that already, MPI is far better equipped to handle any food safety response than ever before."

Ms Goodhew said next year a single scalable model would be publicised that would be across biosecurity, trade and food safety and would be fit for all purposes.

She said a group of science experts would be established, that would include public health expert opinion as well, to call upon in the event of a response being required.

"We need to complete the reform of dairy regulations and we need to make it absolutely clear which tests need to be conducted in a credited laboratory and ensure that information can be disclosed to the Ministry straight away, so it can effectively respond to situations. We're also going to be ensuring collaboration with testing laboratories to improve testing processes."

Ms Goodhew said new food safety legislation would also be introduced next year and a Food Safety Science Centre was being established.

The Government will also be providing almost $8 million over four years for MPI to strengthen its food safety operation.