A man on trial for setting fire to a Wellington storage unit told police he would have owned up straight away if he had done it, because that is the kind of person he is.

Angelo Bitossi is before the High Court in Wellington on a charge of arson relating to the fire at the Kiwi Self-Storage facility in Kilbirnie in April this year, causing millions of dollars of damage. Many people lost irreplaceable items. 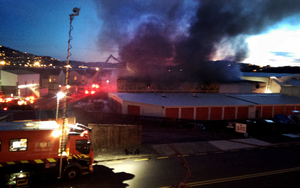 During a DVD interview, Detective Brad Hendra set out the circumstantial evidence found at the scene which pointed to Mr Bitossi's involvement in the fire.

He said CCTV footage showed that the person who set the fire was wearing a yellow Vodka cruiser cap and black and white shoes, similar to clothing owned by the accused.

Mr Hendra said camera footage also showed that a car similar to one driven by the 35-year-old's partner in streets near the storage facility before the fire started.

The detective said Mr Bitossi had also admitted that he disliked the man who rented the storage unit, Darren McKinley, but Mr Bitossi continued to deny responsibility, saying he would have owned up straight away.

Mr Bitossi told police he received several threats after the blaze from Mr McKinley who he said told him: "You should make every day count cos it could be your last."

Mr Hendra asked the accused to tell him the truth about what happened but Mr Bitossi said he could not do that and then said to the detective, "Who is going to protect my missus and kids?"

Defence lawyer Douglas Ewen yesterday suggested to Mr Brodie that the shoes shown in the police photo of the crime scene were his and Mr Brodie said they might look like shoes he owns, but it was not him in the photo.

Mr Brodie admitted that his family disliked Mr McKinley because of trouble he had caused them, but denied responsibility for the fire.