A union says pre-packaged meals brought in from elsewhere and re-heated for patients could soon become a reality at hospitals in Auckland, at the cost of about three jobs. 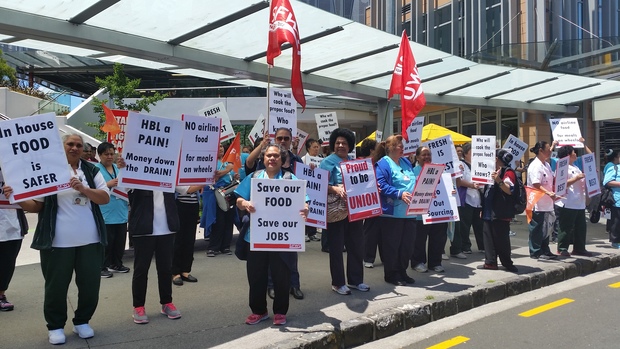 About 70 workers have staged a picket outside Auckland Hospital, opposing a proposal by Health Benefits Limited to outsource the work to the multinational company, Compass.

Service and Food Workers Union spokesperson Jill Ovens said one in four jobs could be cut at Middlemore Hospital and one in five at Auckland, North Shore, Waitakere and Greenlane.

She said it was not just about a loss of jobs but about the loss of skills in the kitchen.

"The implication for the patients is that instead of the food being cooked fresh in this hospital kitchen it will be coming from bags of beef stroganoff from Tauranga and bakery items from Waikikamukau."

Ms Ovens said it would be difficult to monitor the quality of the food and would hit local suppliers particularly hard.

The proposal will be put to a vote at a meeting of the Auckland District Health Board next Wednesday.