The Waitangi Tribunal has been told that expecting the country's biggest iwi to unite is about as reasonable as expecting the National and Labour parties to join forces. 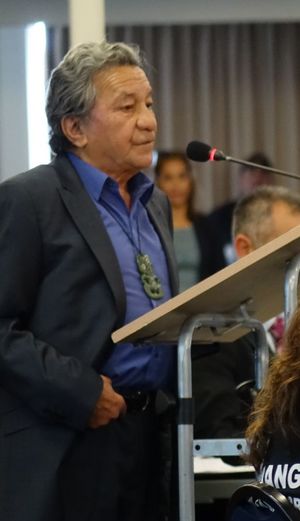 The tribunal is holding an urgent hearing in Waitangi, after 15 hapu challenged the mandate claimed by the board, Tuhoronuku, to settle the massive Ngapuhi treaty claims.

Hokianga rangatira and scholar Patu Hohepa told the tribunal the Crown had created tremendous grievances by trying to impose unity on it from the top down, by backing Tuhoronuku.

The territory involved in the claims was never owned by Ngapuhi as an iwi but by its many hapu, Mr Hohepa said.

"The second thing that grieves us is that the Crown is attempting to put us all together into one grouping.

"Let me ask the Crown to go back to Wellington and see if the can unite the National and the Labour parties and New Zealand First, then come and tell Nga Puhi how to do it."

Hokianga kaumatua Rudi Taylor told the tribunal hapu had seen no benefit from a $60 million fisheries settlement awarded to the Ngapuhi runanga.

Mr Taylor said hapu had no reason to believe any board linked to the runanga would help them.

Tuhoronuku chair Sonny Tau was challenged at one point by a woman carrying a sovereignty flag, who shouted he had sold Ngapuhi out.