A line of high-visibility gear has been developed to make it safer for women working in construction and traffic control. 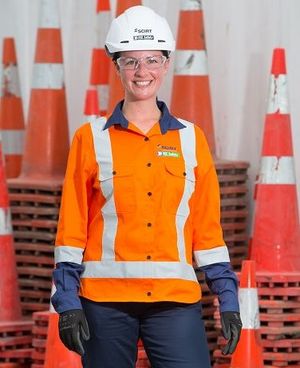 The gear was developed and made by NZ Safety for SCIRT - the Stronger Christchurch Infrastructure Rebuild Team.

Minister for Women Louise Upston said the drive for the project came from women working in the Christchurch rebuild who found the uniforms available unsafe.

The gear was cut to fit traditional women's clothing sizes in an effort to reduce safety risks, such as baggy clothes being caught up in machinery.

SCIRT human resources manager Belinda de Zwart said the clothing developed for women was also about showing they were welcome in the construction industry.

Clothing available for women in such industries had traditionally been designed for men or were unisex.

SCIRT engineer Kimberly Jump said the clothing was about making women feel comfortable in what they were wearing.

"Even the smallest men's safety vest equates to a size 14 for women, which is far too big for many of us.

"For safety and comfort, it needs to fit well and not catch on equipment."

National Association of Women in Construction president Cathy Tracey said the uniforms were about acknowledging that women also belonged in construction.

Council of Trade Unions womens' issues policy analyst Eileen Brown said there was huge support for a uniform that could reduce risk to women.

She said the new uniforms could not risk trivialising the challenges women face in construction.

Real improvement would be made when women were treated the same as men in terms of wages and conditions, she said.

The protective vests and shirts were now available nation-wide.