The New Zealand-based company behind the jetpack has signed a business deal to start developing the technology for the US government.

Martin Aircraft chief executive Peter Coker said under the new partnership with US company Avwatch, it would aim to sell to the departments of Homeland Security and Defense. 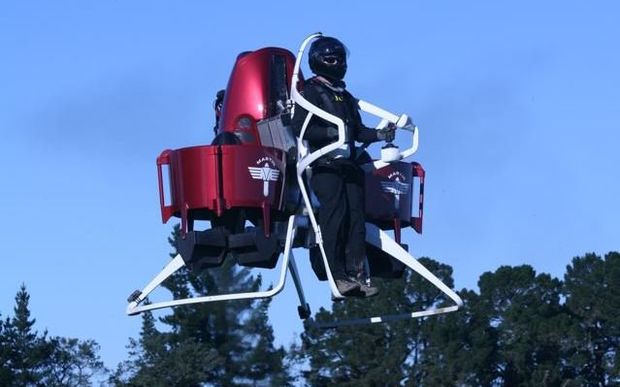 Martin Aircraft has signed a deal with a US firm to develop the technology. Photo: Martin Jetpack

"We're going to work with them to utilise the jetpack capabilities in a number of areas and a number of departments, in federal and local agencies," said Mr Coker.

Watch a test flight of the Martin Jetpack P12

Mr Coker said Avwatch would take a number of jetpacks to the US to give demonstrations, and the full product would include a simulator for training and mission rehearsal.

Martin Aircraft made the world's first practical jetpack, named in 2010 as one of Time magazine's top 50 inventions.

Mr Coker said Avwatch was its first customer, and it represented an opportunity to sell the product across North America.

He said Martin Aircraft had recently moved into a new building in Christchurch, where it had capacity to build about 500 jetpacks a year.

The head of Avwatch, Chris Kluckhuhn, described the partnership as exciting.

"The Martin Jetpack is a disruptive technology, much like the helicopter was when first developed, with substantial capabilities which will be very complimentary to our solutions we can offer our customers."

The Martin Jetpack was created by Christchurch resident Glenn Martin, and its first lift-off was in 1997, piloted by his wife Vanessa Martin.

In 1998, Mr Martin formed GNM Ltd. In 2008 the company was renamed the Martin Aircraft Company.

The research and development of the jetpack has been funded by private investors, and it has received backing from the Ministry of Business, Innovation and Employment, and the Callaghan Institute.