Police have confirmed that following an examination of a house destroyed by fire in Hamilton, no one else lost their life in the blaze. 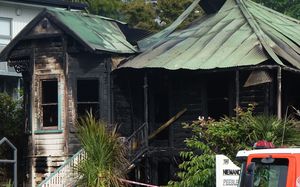 The site of the house fire in Hamilton Photo: RNZ / Andrew McRae

Police were reasonably sure no one else was in the house, but cadaver dogs have been used to make absolutely certain.

They said structural reinforcement would continue on the house to make it safe for forensic teams while they worked to find the cause of the fire.

Detective Inspector Karl Thornton said the work would be time consuming and police would remain at the scene until at least the end of the week.

He said painstaking work would continue, to officially identify the victims.