Civil Defence ordered people to evacuate to higher ground as a precautionary measure following a magnitude 6.5 earthquake off the East Coast late this morning, a Te Araroa resident says. 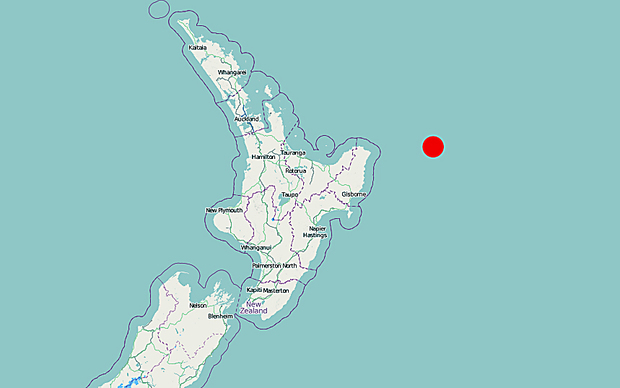 Everything swayed from side to side in her shop when the quake hit 155km east of Te Araroa at 11.33am, Ms Koia said.

She said she understood the Civil Defence evacuation was just precautionary measure.

Civil Defence volunteer Hal Hovell said Civil Defence was unable to tell him if there was a tsunami warning but he advised people to evacuate anyway.

"We've always advocated self evacuation to everybody. If there's an earthquake and you're unsure, just move," he said.

"So people are fairly well up with that sort of thing, looking after themselves."

Civil Defence spokesperson Richard Steele said Mr Hovell was doing what he was trained to do within a limited amount of time.

Civil Defence had received reports of items falling off shelves but no reports of damage or injuries.

The quake was felt widely across the East Coast but there were no reports of damage or injuries.

The spokesperson said five coastal schools were to be congratulated as they all did the correct thing and evacuated inland, as the earthquake went on for a long time.

Five aftershocks, ranging from magnitude 2.9 to 4.0, occurred within an hour.

"They certainly haven't finished. They will continue to go for quite some time. But it's unlikely that we'll see a larger event now or a damaging event in the aftershock sequence."

Whakatane resident Diane said the quake had a long swaying motion, which was quite scary, and she wondered if it was going to get bigger.

She said she was in the big 1987 Edgecumbe earthquake and that was a big violent jerk where everything moved suddenly.

"That was like a big bang and everything just moved really suddenly to the side and it was a real violent, jerky kind of motion, whereas this was more like a gentle sway.

"It just went on for ages," she said.

Te Waha O Rerekohu Area School principal Richard Katipa said staff and students were evacuated almost as soon as the quake hit, moving to a nearby hill in the township.

"I guess after all the recent tsunamis and things, since Indonesia, everyone's a lot more aware of the potential dangers of tsunamis, so we made the call to evacuate and got on our loud speaker system," he said.

"Most of the classes were already moving."

Some students were frightened by the quake, which he described as a steady swaying.

The quake was also felt at Fonterra's factory in Edgecumbe but did not disrupt production.