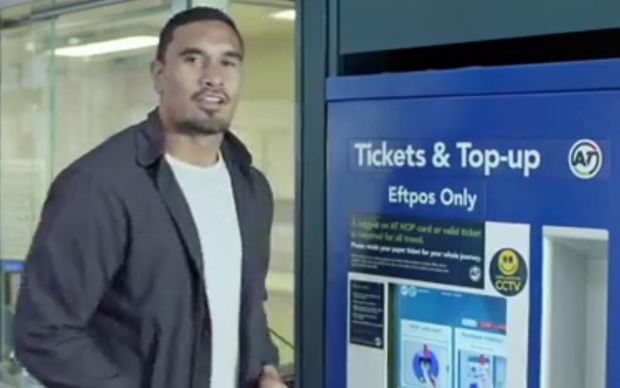 Kaino is fronting a two-year campaign called Get on Board with Jerome for Auckland Transport, targeting the western and southern suburbs.

The campaign was launched last month, and the council-owned agency's list of payments shows $100,000 going to Kaino's agent.

Auckland Transport says Kaino was chosen because he has a big fan base in the west and south.

"Jerome was brought up in the south, he's a good South Auckland boy and we think that will appeal to that population," says chief operations officer Greg Edmonds said.

Part of the push is to promote the electronic AT HOP ticket, which is used on 70 percent of trips, but in the south on fewer than half.

The All Black and captain of Auckland's Blues rugby team will both use and promote public transport and has also spoken at an agency staff training forum.

Auckland Transport said it is getting good feedback on the campaign, and believed that using a celebrity could dramatically lift the impact - providing it was someone with an affinity for the main audience.

Kaino was signed up as an ambassador shortly before being recalled into the All Blacks, and before being elevated last month to lead the Blues.

"We've had over 80,000 views of videos he has made and that, compared with other campaigns is very, very strong," Mr Edmonds said.