Relatives of a man killed a decade ago by prison inmate Phillip John Smith are terrified he has absconded and some are in police protection, a family member says. 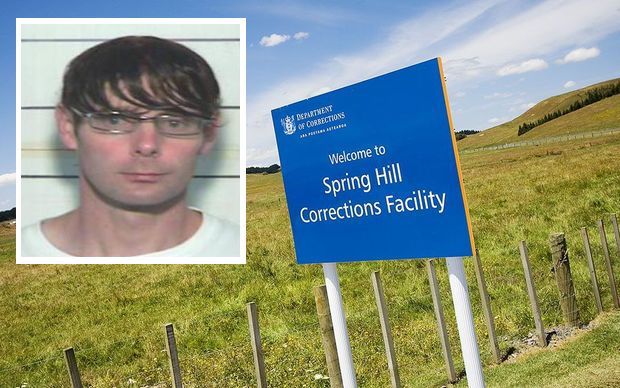 Smith disappeared while on authorised temporary release from Spring Hill prison in Waikato and is still at large.

The 40-year-old was picked up from prison on Thursday morning by his sponsor and Corrections found out during a routine check two days later that he had been unaccounted for since Thursday afternoon.

Smith was sentenced to life imprisonment in 1996 for stabbing to death a man in Wellington whose son he had been sexually abusing.

He had earlier tracked the family from the Wairarapa, where he was facing sex charges, to the Wellington suburb of Johnsonville where they were living in a supposedly safe house.

A relative of the murdered man told Morning Report they were only informed at 4pm yesterday that Smith was missing.

"He was let out unmonitored - I can't believe it.

"I did get a visit from police last night at about 9 o'clock to tell me that some of my family has gone into protection and it was offered to me too."

The woman said she may take up the offer depending on what happened today. She said the family was not told where they were going.

"I've spoken to one of my family who's been put in protection. They're extremely worried. This has upset their whole life yet again. Yet again they're in hiding, it's not right."

The family member Smith had abused was not in the country at the moment.

She said she would only feel safe when Smith was caught.

"I don't have any faith in the justice system to keep us safe. They haven't done it before so why should I believe they can now?"

The relative had asked the Parole Board to put a tracking device on Smith if he was to be released.

Checks made on Saturday

Corrections' National Commissioner Jeremy Lightfoot said Smith had been on an approved temporary release, but his disappearance was a serious breach and the department would review the circumstances.

Mr Lightfoot said Smith had been on temporary release successfully nine times, as part of his reintegration programme.

He told Morning Report that Smith was picked up from prison by a sponsor, a family member, on Thursday morning, and had not been in that person's supervision some time that afternoon.

Corrections checked with his sponsor on Saturday.

"We made contact as part of our routine monitoring ourselves on Saturday afternoon and that was the point at which we made contact with the sponsor," said Mr Lightfoot.

"We were told he had not been with the sponsor since Thursday afternoon."

He said as national commissioner he took responsibility for the custodial supervision of prisoners, and apologised for the time it took to notify the family of the victims.

Public warned not to approach Smith

Police were advised on Saturday evening Smith was not where authorities expected him to be while on temporary release.

Detective Inspector Chris Cahill said this mroning officers from several districts were involved in trying to locate him.

He wears glasses but may have attempted to change his appearance and is known to have purchased and worn wigs, they said.

Police say he may be making his way to the Manawatu or Wellington regions. They say he is considered dangerous and should not be approached. Anyone who has any information is asked to contact police immediately.

In a 2010 decision, the Parole Board called his offending violent, callous and manipulative.

Last year, Smith was denied parole for a fourth time because the board concluded he remained high risk and a serious danger to the community.

A department spokesperson said prisoners on temporary release are not electronically monitored, but are monitored by a support person in the community.

Smith has been convicted of further crimes while in prison, including using documents for financial advantage and causing loss by deception.