Lyttelton opened its new $2.8 million town square at the weekend, the first phase of a series of projects aimed at revitalising the port town after the 2011 earthquake.

The square is the site of the old Albion Hotel which, like so many historical buildings in the town, suffered irreparable damage following the February 2011 earthquake.

Hundreds turned out on Saturday to see the $2.8 million square officially opened. 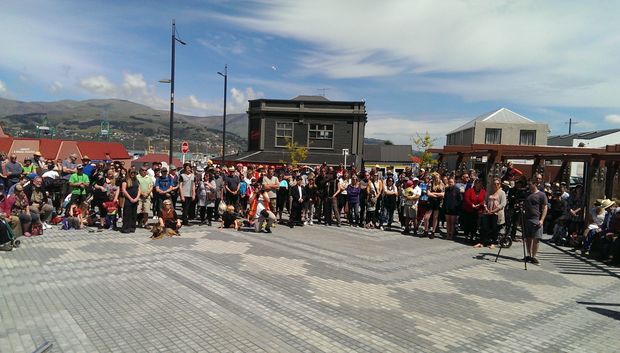 The building that once stood there was demolished soon after the quake and quickly became the unofficial meeting place for the tight knit community, playing host to a petanque club, a community garden and various sculptures.

The city councillor representing the ward, Andrew Turner, said seeing it transformed into something more permanent was a dream come true. 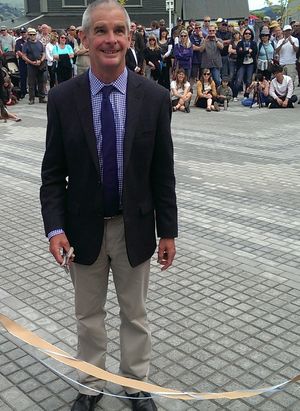 Andrew Turner was one of those to cut the ribbon and officially open the square. Photo: RNZ / Nicola Grigg

He said for a town that had lost most of its historically significant buildings, Lyttelton had proven it was people, not structures, that made communities.

"You know Lyttelton people just wanted to talk about what we were going to do. One of my first reactions following February 22 was looking around and think what happens next. But very quickly out of that came some positive discussions and visions for the future and here's one part of that vision."

The square, which includes a playground and an amphitheatre, has also provided a new home for the town's cenotaph.

This previously sat close to the entrance of the Lyttelton tunnel and allowed only limited space for those wanting to mark Anzac Day.

A teacher at the local primary school, Liza Rossie, said it was a welcome addition and drew on the history of the town.

A carved waharoa or gateway will eventually be added to the square which is the first phase of a series of projects aimed at revitalising Lyttelton.