A second attempt by a steam enthusiast to garner public support to save the historic Kingston Flyer train appears to have failed because of lack of interest.

The train has been rusting away on the tracks south of Queenstown for over a year after it was put on the market by millionaire businessman David Bryce. 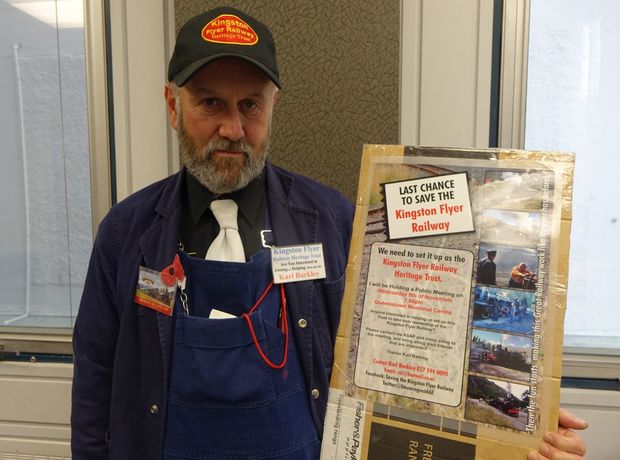 Ill-health dashed Mr Bryce's dream of saving the coal-fired locomotive, which has struggled to make a profit since being sold off by New Zealand Railways in the 1970s.

Rail enthusiast Karl Barkley said the only way it could be saved was to put it into public ownership, under a trust.

It was the second time he had set up a trust and wanted to raise $2 million to buy the train.

Last time the Kingston Flyer sat idle, Mr Barkley raised $50,000 from the public but this time enthusiasm was more muted.

Despite 50 chairs being set out for a public meeting in Queenstown last night meeting only four people turned up and none of pledged any money.

"We've had 43 years and six people walk away from it," said Mr Barkley. "This is a Kiwi icon, it must be saved."

"He's a nice guy, but he's not the right guy for the job. I don't think he can do anything to save the Kingston Flyer - I think it's a bit of a dream."

Rick, an Australian rail enthusiast and part time Queenstown resident who was at the meeting said he would not be supporting Mr Barkley.

"Based on the scepticism and the lack of of any solid plans that have been evidenced tonight I think that's unlikely."

The former owner said he was in negotiation with a potential buyer.

The possible buyer is understood to be Seattle-based New Zealander David Rowell but that so far the two haven't been able to agree on a price.