South Korea is setting up an office in Christchurch to make it easier to get their scientists to Antarctica. 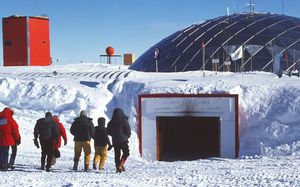 Christchurch is one of the main hubs that scientists worldwide use to get to the continent, and Italy, the United States and New Zealand all have offices at the city's International Antarctic Centre. Korea has now signed on, too.

The countries pool together to transfer of personnel and equipment to the ice much easier.

Antarctica New Zealand chief executive Peter Beggs said it would mean the four international programmes working in Antarctica's Ross Sea would all be located at one hub.

A recent study estimated Antarctic-related activities had an annual estimated value of $102.9 million to the Canterbury economy.