Almost 100 people suffered a broken hip while being cared for by public hospitals in the past year and a report out today says that rate of harm is far too high. 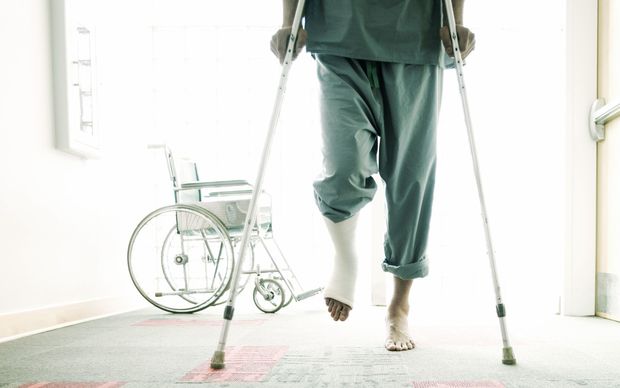 Twenty-nine cases involved fractures from the foot to the thigh. Photo: CORBIS

Ninety-eight cases involved a broken hip, 22 a serious head injury, 43 instances of fracture from the hand to the shoulder, 14 cases of fractured pelvis, and 29 fractures from the foot to the thigh.

The commission says falls accounted for 55 percent of all cases of harm reported by DHBs.

"This is very disappointing given the considerable effort going into reducing harm from falls, and shows this must continue to be an area of high priority for the commission and the sector."

The report says that on admission to hospital, patients should be assessed for their relative risk of falling.

Overall, there was a total of 454 serious adverse events over the year to June, a 4 percent rise on the year before, which the commission puts down to improved reporting.

The report says that of events reported, 73 people died. This compared to 82 deaths last year and 91 in 2011-12. The deaths were not necessarily a result of the adverse event.

Clinical management problems were the second most frequented reported events.

The 158 reported cases included delays in treatment, assessment, diagnosis and observation. The report says most cases were reported not because of a preventable error or omission resulting in patient harm, but because the outcome for the patient was serious and unexpected.

It included 31 events, for example, such as a baby being stillborn, or a patient unexpectedly dying after an operation.

There were 28 events reported due to a significant delay in a patient's care caused by failings in hospital systems. The commission says these cases tend to fall into four main categories, including x-ray reports that identify an abnormality and recommend further treatment or investigation which does not occur. The report says one DHB has now changed its procedures so all radiology results are now signed off.

The report says during the past year in response to this one DHB changed its obstetric processes and the use of swabs is now covered by the same tight counting processes used in operating theatres, and tags that can be seen on x-rays are also used.

The commission says that over the next year it will be working with the health sector to increase expertise in learning from adverse events, including providing training in the review of events.