Cabinet has approved the process for deciding on whether to change the country's flag, which will involve two referendums and cost nearly $26 million. 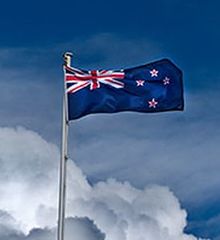 The first referendum will be held at the end of next year, where three or four options will be put forward.

The second referendum in April 2016 will ask voters to choose between the winning design in the first referendum and the current flag.

Deputy Prime Minister Bill English will be the minister responsible for the process.

The total cost has been put at $25.7 million, most of which will be spent on the referendums and a public awareness campaign.