More than 22,000 strikes of lightning have been recorded in upper North Island and out to sea this morning after a front brought rain and thunder. 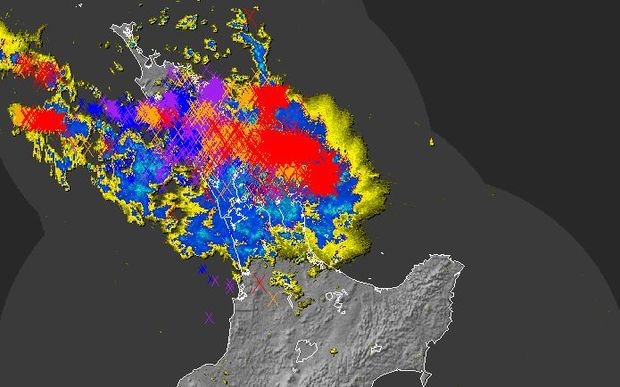 Two hours worth of lightning strikes to 8:50am, during which time 5444 strikes were recorded. Photo: SUPPLIED

The MetService said a very active front is moving across the north of the country, bringing rain and thunder to Auckland, Northland and Coromandel.

Meteorologist Chris Noble said it has brought a lot of lightning strikes and thunder with it.

"They started out over the Tasman Sea and tracked in across Northland particularly, and also northern parts of Auckland."

The Lightning and heavy rain that hit the north of the country has left a thousand people in Northland without power. The worst affected area is south of Whangarei to Kaiwaka.

Northpower said line repairs will not start until the lightning strikes stop.

Spokesperson Steve McMillan said rural areas around Dargaville are the worst hit and although power has been restored in some places, others are losing power as the thunderstorms continue.

He said it is currently too dangerous to send line-workers out and some people will have to wait until the storm eases.

Vector Energy is calling in extra staff tonight to deal with the continuing bad weather.

If you saw the lightning strikes and would like to share pictures or video with us, please email to: iwitness@radionz.co.nz

Mr Noble said another wet front is travelling north towards Wellington this afternoon, which will move to the top of the North Island tonight, bringing more rain.

Meanwhile bad weather elsewhere in the country has left hundreds of people without power.

Severe gales have caused power cuts in central Canterbury and have brought tree branches down on power lines.

The operations manager for the lines company, Orion, Stuart Kilduff, says up to 1700 homes around Darfield, Greendale, Coalgate lost power earlier but it has now been restored.

He said supplies are steadily being restored to another 137 homes.