Kurdish-New Zealand families say they fear for the lives and freedom of their relatives if Islamic State continues to grow and advances further in the Middle East. 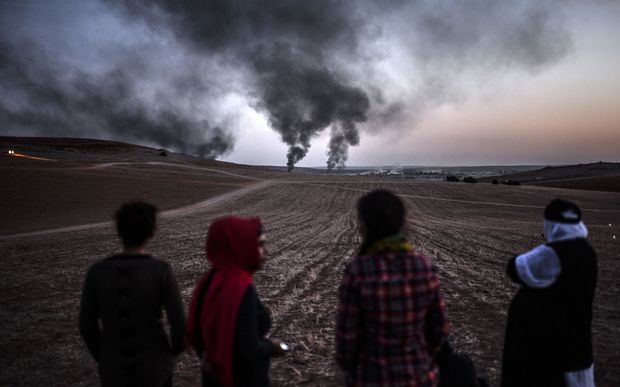 Smoke rises from the town of Kobane yesterday at the Turkish border near the southeastern village of Mursitpinar. Photo: AFP

A number say they have cousins and uncles fighting the militant group on the frontline, but desperately need more international help if they are to protect strategic areas like the Syrian city of Kobane near the Turkish border.

Rez Ricardo arrived in New Zealand with her parents and siblings when she was six. But the 23-year-old's huge extended family are left behind, scattered along the Kurdish borders of Syria, Turkey, Iran and Iraq.

Ms Ricardo said they have now been forced to take up arms as part of the part-volunteer Peshmerga army against their biggest threat - Islamic State.

"A lot of them are very close to where there's fighting happening, so they're in close vicinity to really dangerous situations. I've got a lot of family (members) fighting in the Peshmerga, they're right on the frontline fighting against ISIS, so for us it's really critical."

She said her family struggles to cope and waits desperately for news.

"I won't hear for a while because they're busy fighting or they're in certain places but now and then we get calls to update us. Sometimes it's sad news like the number of people who have died within they're team, or how close they are to actual ISIS, so yeah, it's bad and good news sometimes." 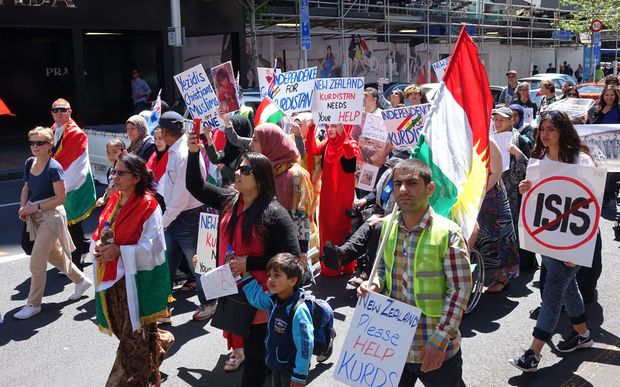 Members of the Kurdish community say more international help, including from New Zealand, in the form of aid and troops is needed. Photo: RNZ / Lauren Baker

Ms Ricardo was one of over 200 New Zealand-Kurds who marched in downtown Auckland at the weekend to show solidarity with family and friends fighting and falling victim to Islamic State.

They say hundreds of thousands of civilians are at risk of genocide, and that ISIS has displaced over 200,000 Kurds by capturing 350 villages and towns. They say people are dying of starvation and refugees are in critical need of the basics like water and shelter.

One of the organisers of the march, Sirwan Namo, has cousins and uncles fighting in Iraq and fears the long-term consequences for civilians if Islamic State grows stronger.

"There are a lot of elderly and children that are being victimised, as well as women in general. They don't have any rights, we see in the news how they have been sold into the market, as well as decapitation. It's all part of terrorism."

Addressing the rally, he outlined the demand for more aid and weaponry from New Zealand and said the rest of the world is failing Kurdish fighters.

"The so-called international coalition to fight the ISIS have not helped Kurdish resistance effectively despite witnessing the ongoing genocide committed against Kobane. They have not fulfilled their real international legal obligations."

Although the group want extra humanitarian aid and weaponry, Mr Namo said he also wants the New Zealand Government to send in troops.

A community leader, Sarkawt Abdullazada, said the Kurds are alone in fighting an international battle.

Prime Minister John Key is weighing up options as to how New Zealand should respond to Islamic State.

Meanwhile, worldwide marches for solidarity with Kurdish fighters are planned for Saturday when more of New Zealand's Kurdish families will rally to continue to show their support. 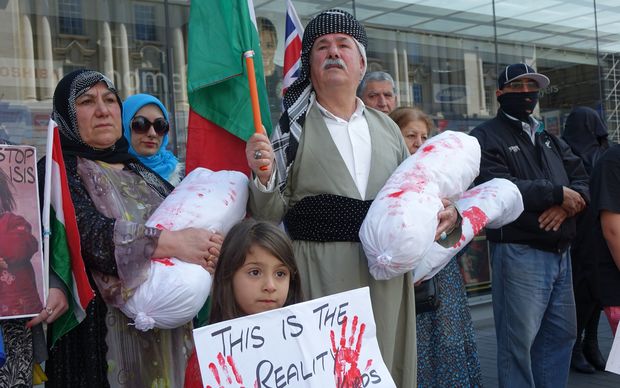