Students at the University of Auckland have chained themselves to the Vice-Chancellor's office and the roof of his building, saying it represents how students are chained to debt.

They are angry about what they describe as the constant above-inflation rises in fees of 4 percent a year. 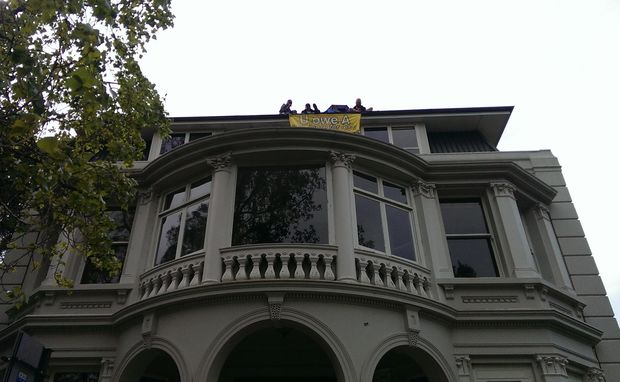 Students at the University of Auckland have chained themselves to the Vice-Chancellor's office and the roof of his building. Photo: RNZ / Lauren Baker

The small protest is being taken seriously with the arrival of two police vans and a car-load of police, as well as extra security guards.

Between them they now outnumber the students who are protesting.

It excludes those who don't want to have the risk of having to pay a $30,000 loan back, it automatically excludes some of the most marginalised students.

And for those who do take on a student loan, how can they expect to start saving for their first home when they can't even afford to pay back their student loan?

Mr Lamusse said there will be a rally outside the building at 1pm.

The protest comes before the University's fee-setting meeting later today.