Being long-term homeless is not a choice that anyone makes, social policy campaigners say. 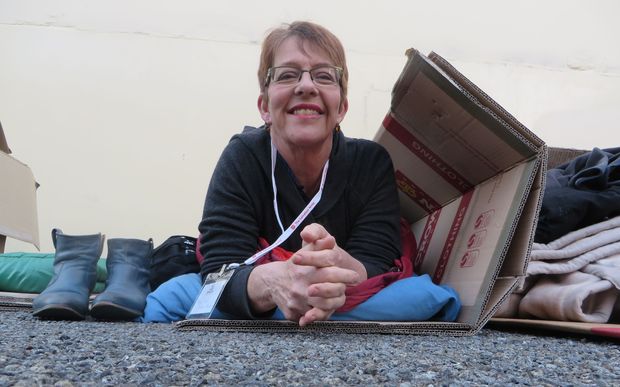 Wellington mayor Celia Wade-Brown settling in for the night to raise funds and awareness for the nation's homeless. Photo: RNZ / Shannon Gillies

This country's homelessness rate is estimated to be one in every 120 people.

She said women and children were also finding themselves in that situation and people arrived to the predicament in a variety of ways.

"There are people with addictions and problems but there are also people who have left their flats because they're scared of domestic violence."

The event was timed to coincide with World Homeless Day. 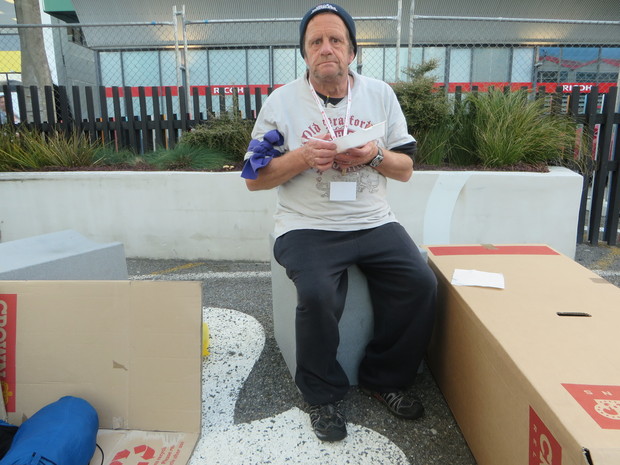 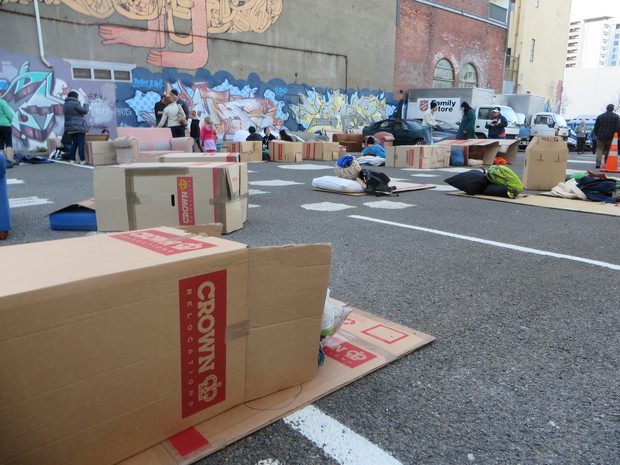 Fundraiser participants included a mayor, Salvation Army representatives, and members of the public, including some who were homeless. Photo: RNZ / Shannon Gillies

Not all homeless sleeping rough

While there is a perception that the homeless only include those sleeping rough, it has been estimated that 80 percent of people who are homeless might instead be sleeping in a car, in a garage, three families to a flat, or just stuck in sub-standard accommodation.

"It's not as simple as counting the number of people sleeping under motorway bridges or the town belt."

In Auckland, Salvation Army Manukau and Auckland University of Technology University communication students launched a Trade Me auction called 'Tent For Any Tenant'.

The listing featured a tent being sold as a family home.

It was done in a bid to show support for the fight against family homelessness, and the view that many New Zealanders hold about such circumstances being a result of individual choices.

Rent in Auckland is increasing 10 percent faster than incomes, and house evictions are on the rise, which the event's organisers say initiates a cycle of low income families and individuals living in vehicles, tents and other unsuitable conditions.

Despite that, he said councils and the Government were working on policy concerning the homeless, and he was pleased that the spotlight and media attention at the moment was on housing in general.

"We have the bigger picture at the moment where we're hearing about the lack of housing or affordable housing."

But he said he believed charities were used to pick up the pieces after the implementation of policy and that central and local government needed to take more ownership of the issue of homelessness.

"The hard part for government - it's not just one thing that's causing it. It's a mixture of things. We've heard a lot about income equality. I think that's a part of it."

She said poverty and employment needed to be considered along with having suitable support structures in place for people leaving hospitals and prisons.

She added that one of the most important things that the Government and councils could do was increase housing.

"What we need to do is create more modest, affordable, still warm and dry housing."

She said New Zealanders needed to be concerned about the homeless.

"I think cities and countries are defined by how well they actually take care of (their) most vulnerable people.

"I certainly grew up in a council flat in London that was certainly warm and dry, if somewhat sub-standard to our revamped council housing, but it's also about what kind of a city do you want to live in?

"A more equal society is a happier society."