The mother of a woman murdered by her former boyfriend has won the Supreme Women of Influence Award for her campaign against domestic violence.

Lesley Elliott started the Sophie Elliott Foundation after her 22-year-old daughter was stabbed repeatedly by her abusive ex-partner and university tutor Clayton Weatherston in 2008. 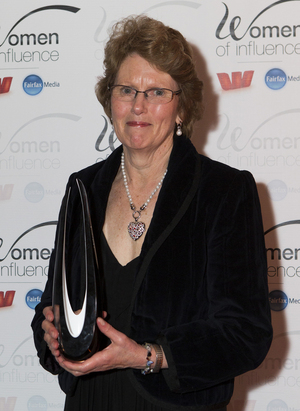 Lesley Elliott said the tragedy of what happened to her daughter led her to create the foundation. Photo: Supplied

Weatherston was convicted of murdering Ms Elliot, who died at her parents' home in Dunedin. In 2009, he was sentenced to life imprisonment and ordered to spend at least 18 years in jail.

The foundation works with police to educate school students on healthy relationships, using Sophie's story as a starting point.

Mrs Elliott received the annual award at a ceremony in Auckland last night, saying she felt humbled but also sad about the circumstances of her success.

"I wanted to tell the [students] about her relationship - not what happened in the end - and about the signs we missed in that relationship. Because we didn't look at it as being abusive, it was unusual and different and very tumultuous as they said at the trial, but that was where it started."

Mrs Elliott said the tragedy compelled her to start the foundation. After realising that Sophie had been in an abusive relationship, she said she had to do something to prevent other families going through the same pain.

"I didn't want to be in this position. I had to do something for Sophie, quite honestly, I could not let it go. When we realised that she had been in an abusive relationship, I felt like we needed to do something. And I didn't want any other families going through what we'd been through."

The Loves-Me-Not educational awareness programme was trialed last year in nine schools and evaluated as being very successful. It will now be introduced throughout the country.

Former Minister of Justice Simon Power said Lesley Elliott's impact on political discussion around domestic violence was a game-changer. "Her influence in this area of New Zealand consciousness is unequalled."

But Mrs Elliot said the award was entirely unexpected.