A severe weather warning has been issued by the MetService, with wintry conditions affecting parts of the central North Island. 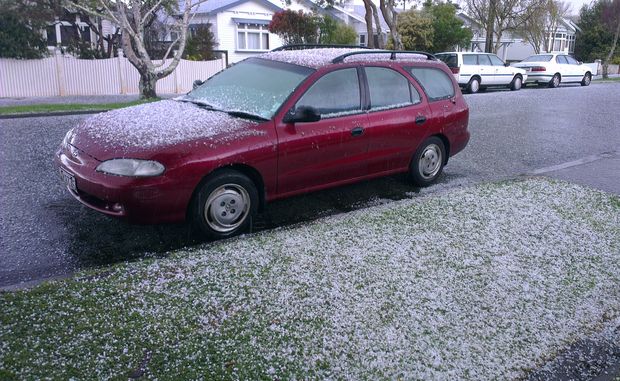 A southerly change brought hail and snow to parts of Lower Hutt and Wellington this afternoon. Photo: RNZ / Colin Pearce

A forecaster for the MetService, Chris Noble, said a southerly change brought hail to areas of Wellington this afternoon, including Lower Hutt and the Ngauranga Gorge, with snow also falling on the Rimutaka Hill.

Mr Noble said it was now moving up the Kapiti Coast and northern parts of Wairarapa.

"Got some very heavy showers with it and they're also bringing hail as well. That change will continue to move northward as we go through the rest of the afternoon, getting up towards Manawatu and southern parts of Hawke's Bay by early this evening."

But he said the most intense weather had passed and that it would continue to ease.

Tomorrow, a deep trough is forecast to bring heavy rain to the South Island's West Coast and northwest gales to eastern areas from Canterbury to Hawke's Bay.

Police have urged drivers to be cautious on wet roads, after a milk tanker crashed, killing the driver.

They were called to the crash in Waitoa about 7.30pm this evening, and the driver died at the scene.

The Serious Crash Unit is now investigating, and the road has been closed to clear the scene.