ANZ call centre workers in Auckland are walking off the job to protest against what the union says are the bank's attempts to casualise its workforce. 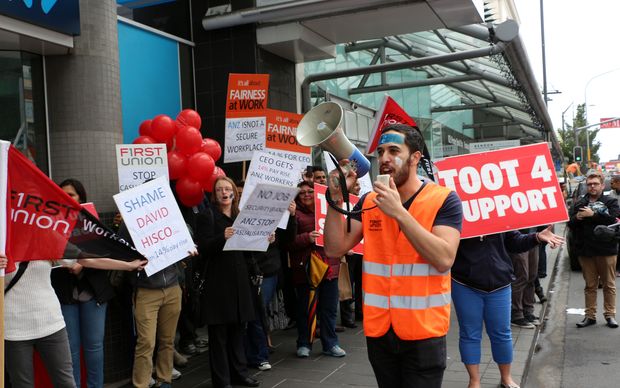 FIRST Union and the country's biggest bank are at loggerheads over a new collective employment agreement, after the union rejected a pay rise of between 2.75 and 3 percent.

Union organiser Jerome Mika said the bank wanted its employees to be more flexible in the hours they work, reducing job security.

He said today's protest was aimed at getting them back to negotiations.

"Ideally we want to get this settled over the table but what we've found is ANZ has been very difficult. We're asking them to come back to the table and to negotiate meaningfully to the satisfaction of our team."

He said it was ironic considering the chief executive of ANZ, David Hisco, took home $4.1 million last year, after a 14 percent pay rise made him the highest paid chief executive in the country.

He said a vote to decide whether ANZ workers would hold a nation-wide strike would be known on Monday.