The Rimutaka Hill Road between Wellington and the Wairarapa is open again after being closed early this morning following a police pursuit. 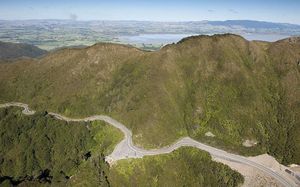 Police spokesperson Inspector Dave Rose said officers found a group of five people breaking into a car in Upper Hutt about 3.20am.

The group then took off in a Mitsubishi Mirage and were followed by police over Rimutaka Hill Road. They crashed on the Featherston side, about half way down the hill.

Police closed the road to clear the crash and find the five people.

Ten police officers and a dog handler were involved in the search and the group was found "cold and wet" in scrub. They were all arrested.

One lane was reopened by 6am and the road was fully open again about 7am.