A Christchurch mother has told the High Court the four-year battle she has had with the Earthquake Commission and insurer Southern Response has been soul destroying.

Cameron and Suzanne Kelly say their Burwood home was damaged in the September 2010 earthquake and left uninhabitable by the February 2011 quake. 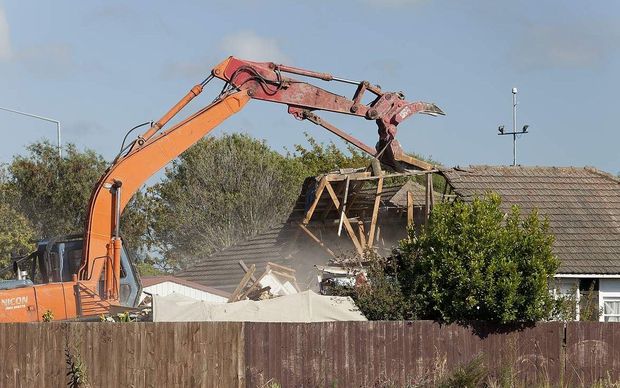 A house being demolished in Burwood following the February 2011 earthquake. Photo: PHOTO NZ

They do not accept that damage to their home was caused by wind and a flax bush rather than Canterbury region's earthquakes. It is believed they are the first residents to take EQC to court over its assessment processes.

The couple said they had been advised their home would cost up to $590,000 to rebuild, but EQC had offered $53,000 to repair its foundations. Several houses surrounding theirs have been demolished.

Ms Kelly told the Christchurch court today that as time wore on, she was subjected to bullying and mind games by the commission, and her family has been put under enormous emotional and financial stress.

"We have had to endure many conflicting reports, rude phones calls where I have endured bullying tactics, being told if I didn't agree with what EQC wanted to do my case would be put to the bottom of the list.

Mrs Kelly told the court that as time wore on, she was subjected to bullying and mind games by the EQC, and was told that if she didn't do what she was told, her claim would drop to the bottom of the queue.

"Returning to our property to try to maintain the gardens, walking through a home that has been subjected to the weather elements for three-and-a-half years is soul-destroying, not to mention family time that is taken away by trying to maintain two properties, work and run a family."

EQC lawyer Bruce Scott asked why she originally filed a claim for more than $1 million. Ms Kelly replied that she did not know what she was entitled to.

Earlier, Justice Mander told the couple's lawyer he may be making making errors that could mean his clients miss out on an insurance settlement.

Mr Scott told the court today that he can not argue the case because their lawyer, Grant Shand, is incorrect on the point of law he is bringing the case under.

The judge issued a warning to Mr Shand. "As it's presently pleaded, and despite the fact you've been put on notice, it would give rise to legal argument that could possibly result the court being unable to provide a remedy because of legal errors; notwithstanding the merits of your case."