Middlemore Hospital is urgently investigating how a baby was taken from one of its wards last night. 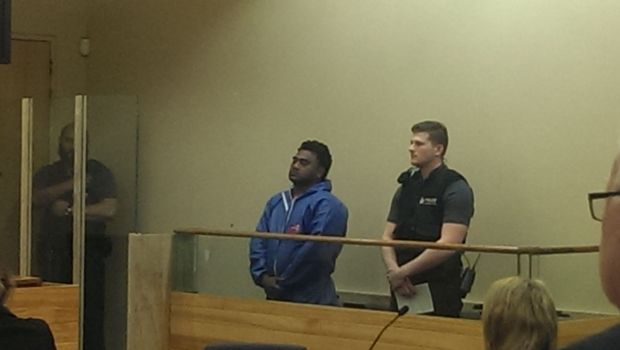 Fa'atiga Manutui - one of the two accused - appeared in the Manukau District Court this afternoon. Photo: RNZ

A 31-year-old man and 26-year-old woman appeared today in the Manukau District Court charged with kidnapping the baby from the South Auckland hospital.

The five-day-old girl was found safe and well by police early this morning.

When Fa'atiga Manutui, of Otahuhu, appeared in the court this afternoon, Judge Jonathan Moses granted him bail but with a night curfew. He is also not allowed to go within 100 metres of the hospital's maternity ward.

The woman has been given interim name suppression and is due to undergo a psychiatric assessment. The pair are due back in court next month.

Reports said the baby was taken not long after visiting hours finished at 8pm last night when a woman claiming to be pregnant was allowed into a ward with a man.

Middlemore Hospital said it believed a man and woman entered the ward last night through a normally-locked unit during visiting times, when another family was leaving the unit.

A midwife in the unit went to check the woman's details and when she returned the pair had disappeared.

Shortly after, it was discovered that the baby was missing and the midwife alerted security and police immediately. It is thought the couple were identified by police from CCTV footage.

The girl was reunited with her parents after police found her at a Manurewa property at 4am today.

A woman who gave birth to all her three children at Middlemore Hospital said there were unlocked doors to her ward, and it looked easy to get into.

Carol Tansey said her youngest was born at the hospital seven months ago.

"When I went in, there was only one door actually locked on one side," she said.

"And I noticed, on the left hand side, the door was actually open and nurses were coming in and out. It hadn't actually locked. It looked pretty easy for people to get in."

Middlemore Hospital said it would conduct a full investigation to determine how the baby was taken.

It is the second time an infant has been taken from the wards. In 2012, Neha Narayan abducted a newborn but was stopped in the hospital's carpark by nurses.

Director of hospital services Phillip Balmer said the hospital was concerned that additional security measures it put in place following the 2012 abduction, were circumvented.

Additional security cameras, locking down all entrances, and putting extra security staff at hospital entrances were introduced at the time.

Mr Balmer said an immediate review of the hospital's internal security systems would be conducted in conjunction with police, so improvements could be made.

Changes would be made and details made public to ensure the community feels safe, he said.