A woman has a fractured skull and bleeding on the brain after going to help a woman who was having her bag snatched on Auckland's North Shore, police say. 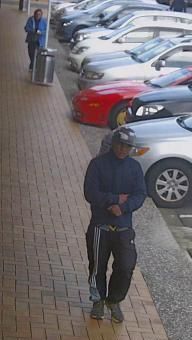 CCTV footage of a man police want to talk to following an attempted bag snatch on the North Shore. Photo: NZ Police

Detective Senior Sergeant Stan Brown said a young man tried to snatch an Asian woman's handbag as she entered the Countdown supermarket at the Northcote Shops in Lake Road, on the North Shore, about 1.40pm today.

A 43-year-old woman who was at the supermarket with her two children saw what was happening and went to the woman's assistance.

"As she intervened, the offender struck her in the back of the head," Mr Brown said.

"She was knocked to the ground and sustained a serious head injury. She has been taken to Auckland Hospital in a serious condition."

The woman suffered a fractured skull and bleeding on the brain and was due to undergo surgery tonight, he said.

Her children, aged two and four, were not injured in the incident.

The offender fled the scene empty-handed and had not been found. He was described as a young Maori or Pacific Islander, possibly aged 15 to 16. He was wearing black clothing and a baseball cap.

The woman whose bag he tried to take left the scene before police arrived, and they wanted to talk to her, Mr Brown said.

"This woman was acting as a good samaritan in coming to the aid of someone who was being attacked," he said.

"She's sustained a serious injury in front of her own children and we're determined to identify and apprehend the offender as soon as possible.

"If you were there, please call us."