Wellington businessman Terry Serepisos will not be automatically discharged from bankruptcy following opposition by the Official Assignee. 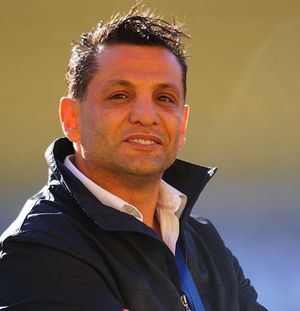 Terry Sereposis at Wellington's Westpac Stadium in 2008. He is the former owner of the Phoenix football team. Photo: PHOTOSPORT

Mr Serepisos was declared bankrupt on September 2011 and lost ownership of the Phoenix football team that month. He would have become eligible for discharge next month.

But the Official Assignee, which administers all bankruptcies, said an objection to his discharge was filed at the High Court in Wellington.

His lawyer, John Langford, believes the opposition was due to concerns over the length of time Mr Serepisos has spent out of New Zealand.

Mr Langford said his client had permission to travel for two weeks, but was out of the country from June helping his 80-year-old mother in Greece.

Mr Serepisos produced a letter from the Embassy of Greece in Wellington to explain his absence.

The former reality television star also appeared in the Family Court today over unpaid child support, although he denies owing any money. Judge Pat Grace adjourned that case until 24 October.

Outside court, Terry Serepisos said he was stunned to be arrested after returning home from a trip to Greece. He was detained under a warrant issued earlier this month by the Inland Revenue Department.

"I didn't even know there was a warrant out there to turn up to court," Mr Serepisos said this morning. "I couldn't even defend it. I was quite flabbergasted when I turned up in the airport and suddenly I'm arrested."

Mr Serepisos described the situation as a storm in a tea cup and said he wasn't aware of Inland Revenue trying to contact him over the past few months.

He said the case was over a few thousand dollars, but he did not believe that he should have to pay anything. The last time he paid child support was just before he went bankrupt, and he has not spoken to his son's mother for four years.

Mr Serepisos said his son was nearly 20 years old, and had lived with him for the past five years. "He's not a little child. He's a grown-up man."

He said his son had picked him up from Wellington airport yesterday and was upset by the situation.