The New Zealand Red Cross is overhauling the way it deals with weather disasters in the Pacific.

Red Cross leaders from the Pacific Islands are meeting with Pasifika community leaders in Auckland to help draw up a new disaster management plan before the coming cyclone season. 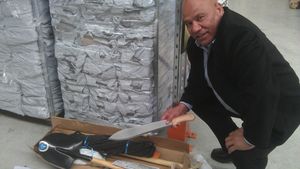 The aid organisation's secretary-general, Tony Paine, said Pacific countries were bearing the brunt of climate change and better planning and co-ordination was essential to make sure the right help goes to the right places as quickly as possible.

"Storms are are becoming more frequent and more severe. That's really making us think we have to be very, very good at this because we are facing quite literally a tsunami of really negative consequences from those changes."

Mr Paine has set up an advisory group of Pasifika leaders in Auckland, including the Tongan Advisory Council.

Chair of that body, Melino Maka, said changes being made by the Red Cross will vastly improve the ability of Pasifika communities to get cyclone relief to family in the islands.

Mr Maka said International Red Cross shelter kits provided to the Ha'apai group in Tonga after Cyclone Ian in January 2014 had been unsuitable.

"What's missing is a garden fork, a good-sized machete and a spade," he said.

The two spades supplied with the kit had wooden handles which wouldn't last long on the islands' hard ground, he said.

"Once the handle breaks, they won't be able to afford to get another handle.

"I think it's good to have this discussion so they can plan proper, appropriate kit for the condition of the islands."

Mr Paine said the Red Cross was also looking at how to get emergency communications and supplies set up before disaster strikes.

A lesson from cyclones Evan and Ian was to use the several days of advance warning to set up emergency communications, particularly in isolated areas.

"So we're going to preposition our our telecoms specialists who can help to set up emergency and satellite based communications systems. So we can then say to people in New Zealand well actually don't send X, Y and Z what we need is this, this and this.

"We are also talking to national Red Cross societies about prepositioning other supplies like shelter and kitchen kits."

Mr Maka was also looking forward to a "vastly improved" co-ordination of relief supplies from Pasifika communities to family in the islands.

He said in the past, the aid organisation has just talked to the New Zealand and Pacific governments.

"Often it's quite a time-consuming, costly exercise, but the new approach, working with Red Cross, and especially the advisory group will actually cut through all those bureaucracies, make the process easier, and actually have a good buy-in from our community."