The MetService says the South Island will get its turn to take a battering of wild weather overnight, after strong winds cut power to thousands of homes in Auckland earlier today. 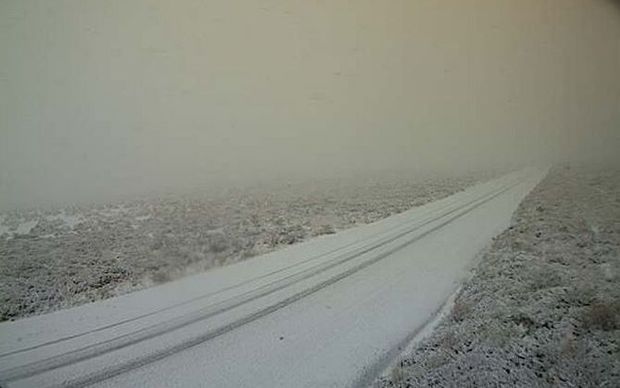 The Desert Road was closed due to snow earlier today. Photo: NZTA

A severe weather watch is in place for Southland, Otago and Nelson. A severe gale warning is also in force for the eastern coasts stretching from the Wairarapa up to Gisborne.

Gusts of up to 140km/h were recorded in Wellington, Northland and the Hauraki Gulf earlier today.

In Auckland, Vector said just over 2100 homes remained without power, down from 10,000 at the peak of the storm, and all should have it back on tonight.

The MetService said the Desert Road in the central North Island and the Rimutaka Hill Road connecting Wellington and Wairarapa are likely to remain open overnight, as just a few light snow flurries are predicted. However, drivers are being warned to take care.

Cook Strait ferry sailings were cancelled throughout today, due to heavy seas with swells reported to be about 7 metres.

However, an Interislander ferry spokesperson said the Kaitaki left at 9pm as scheduled, despite the Aratere having to operate a freight-only service at 6pm due to the conditions.

Passengers were rebooked on other sailings.

A number of flights to and from Wellington, Christchurch and Queenstown were delayed, and one flight from Queenstown cancelled.

Earlier, KiwiRail suspended all TranzMetro services between Wellington and Petone because of the high tide and strong winds washing sea water on to the rails. They have resumed following a track inspection, but there were delays.