Scientists from Te Papa Tongarewa and the Auckland University of Technology (AUT) had a rare opportunity today to examine an intact colossal squid, which they hope will shed light on the diet and life cycle of the mysterious deep-ocean creatures.

This specimen is one of only two of its kind to be collected intact, and a team of squid experts from AUT's Institute of Applied Ecology, led by Kat Bolstad, spent several hours examining and sampling different tissues.

The first thing the team established was that the specimen is female and weighs about 350kg, slightly lighter than the only other complete colossal squid on display in Te Papa's natural history galleries. 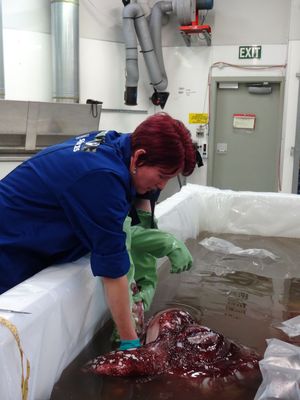 The team was particularly excited to find that the plate-sized eyes, the largest of any animal, had not been damaged and the light organs near the eyes were also still intact.

"The colossal squid eye is the largest in the animal kingdom. We will now have a good look at the retina and the eye lens," said Dr Bolstad.

Another surprise was that the some of the prey the squid had eaten was still in its stomach.

Colossal squid live in the deep ocean around Antarctica. They are a favoured prey item for sperm whales, but scientists do not know what these enormous cephalopods feed on.

Heather Braid, who is part of the AUT team and specialises in squid genetics, said this was the first time anybody had found stomach contents in a colossal squid.

"The only thing that's known so far, based on isotope analysis where you use the concentration of nitrogen and carbon in tissue to determine where it sits in the food chain, is that it is a top predator, but we don't know what it eats."

The team also took tissue samples in the hope of sequencing the entire colossal squid genome.

Colossal squid are slightly shorter but much heavier than giant squid and have rotating hooks and rows of suckers on their long arms and tentacles. 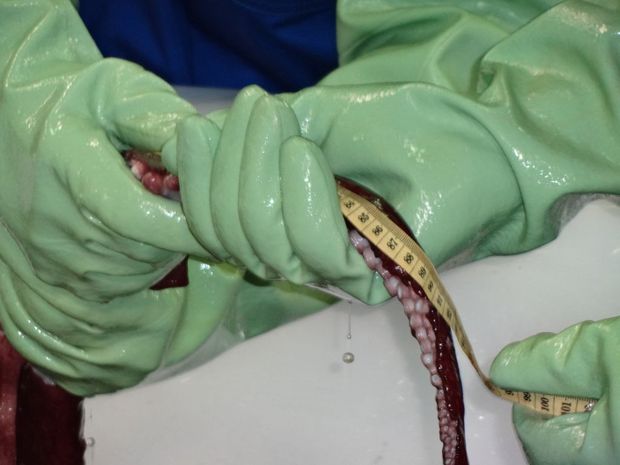