A High Court jury's heard details of an attack on a police officer, by the wife of the man accused of attempted murder. 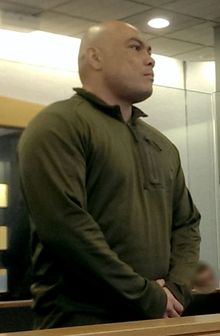 Walter Tauatevalu, who is charged with the attempted murder of police officer Simon Tate. Photo: RNZ

Walter Tauatevalu's wife, Luan Rogers, told the court she had just been fighting with her husband in the car when Sergeant Simon Tate pulled them over.

Ms Rogers said that while the officer spoke to her, her husband was told several times to stay where he was.

She said when she next looked out the window, Walter Tauatevalu was upper-cutting Sergeant Tate with a lot of force and was really wanting to hurt him.

She saw three or four punches and fluid flying from the officer's face, and she said Sergeant Tate's head was down like he had no life in him.

A jury has just been sworn in at the High Court for the trial, which is expected to last until the end of the week.